It was pointed out to me by my own boyfriend, yesterday, that it's been a while since I posted here. I've been too-too busy, I explained, while I sipped a margarita and bobbed around in the lake. 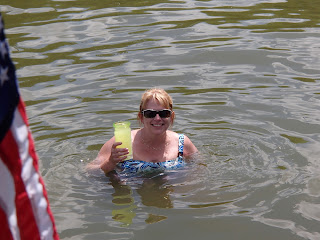 Me, busy not blogging.

Still, I promised I'd get something up soon to move the last tired post down the queue, so here I am.

Truth is, I've immersed myself into gardening this summer. I'm up early with coffee to check the vegetables and the flowers. The vegetables are doing great; however, the flower beds are losing their battle to this guy: 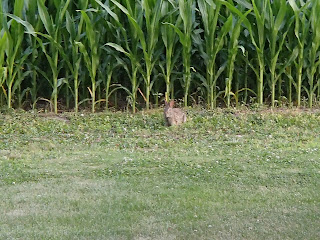 Sure that I had them whooped, this year I planted nothing but marigolds. Critters hate marigolds, I was told; they don't like the pungent smell. Hundreds of marigolds! I started them in the house in February, and I've planted them in the flower beds and around the perimeter of the garden.

Turns out that not all critters hate marigolds. Robins, rabbits, and groundhogs love, love, love them. After using a product called "Critter Ridder," and sprinkling straight cayenne pepper around, to no avail, I broke down and paid $18 for a bottle of fox urine. The stink is supposed to scare the animals away, but the container I've set in the flower bed has been dug up and tipped over 3 times.

One more trip this weekend found me falling for yet another product called "Repels All," which promises to irritate the nasal passages of whomever is digging up  my marigolds. I bought it, and a third flat of marigolds. If this doesn't work, I'm going with silk flowers.

The garden is coming along beautifully, though, and I love working in it. I park a blanket in the dirt, and dig up a bushel of weeds at a time. A chore that a lot of people hate, keeping up the garden is meditative for me. I lose my thoughts in gardens past, with my grandparents and parents, until I lose them altogether, and think of nothing while I work. 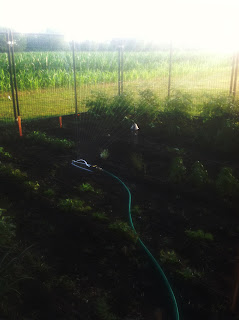 Tonight we spent a couple of hours securing a net across the entire fence, to try to ward off starlings and robins that will nip off the tomato blossoms. The garden has become quite the fortress; Clint calls it the "Vegi-Penitentiary."

It's all worth it. "Someday we will have a garden" has come about, after four (five, six) years of waiting, and tonight we ate the first salad from the garden. Our "dream salad," I called it. 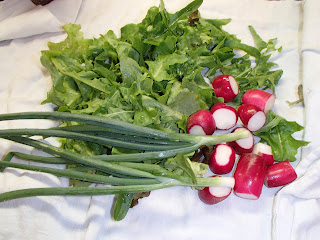 On a somewhat unrelated note, bringing in my own onions reminds me of a story from my childhood. My sister and I were all dressed up, and Mom had taken us to Olan Mills for a portrait. I was about 4 or 5, which would have made Teri 3 years old or so, and Mom was determined to keep our little dresses clean and wrinkle free. We were ordered up into chairs, told to sit still, and "act like good young 'uns."

In my mind, she had sat me down and told me to be a good onion. I had no idea what that entailed, but being an obedient child, I did what I was told:

I was the best onion I knew how to be. 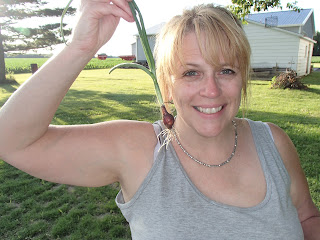