I've been busy busy, Brian was home for 2 weeks, I dropped him off at the airport last Friday. Sunday I found out my new tenant (& friend) needs to move in to my place on Friday, and Monday was Mom's birthday, so I've had 3 days to pack up my house, and the storage isn't available until Monday, but the sheets are clean and the beds are made so she'll be ok and tomorrow I'm doing the polar plunge, and then maybe I can start blogging again.

Posted by Lori Stewart Weidert at 8:41 AM 3 comments: Links to this post

Freezin' for a Reason

I am plunging. WE are plunging, we have rallied around and actually managed to find 5 or 6 people that will constitute a TEAM of  people idiotic fun-loving enough to jump into cool water for a great cause: To raise money for The Special Olympics. 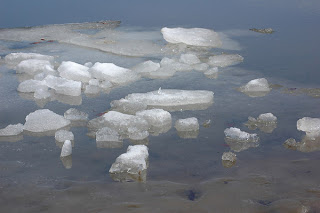 A view of the lake at the plunge 3 years ago.
We are plunging for Team Toys for Troops!

Here are our members, so far: 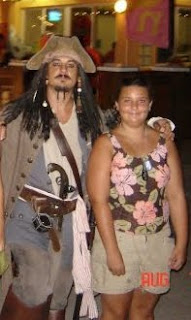 Give it up for Lizzie! Her mother, Debbie, is marrying my cousin Mike this summer, so that makes Lizzie my....cousin too, as far as I'm concerned. (Pirate not included) 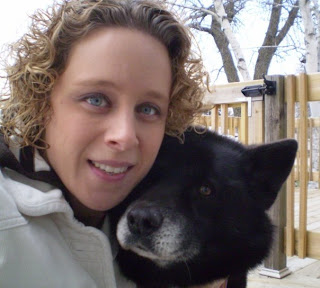 Let's hear a round of applause for Sarah Westhoff! Her hubby, Fred, works with Clint. Fred and Clint are not participating in the Polar Plunge. They say it's because they have to work that day. Right. That's why. We believe them. 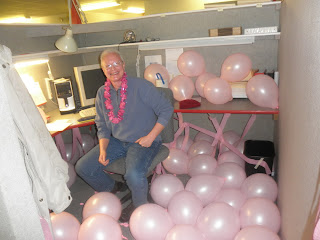 A Standing O, please, for Sue Klefstad. This photo was taken about 2 weeks ago, just after Sue's last chemotherapy treatment, for breast cancer. After a tough year for this always-smiling co-worker of mine, her oncologist has given her the go-ahead to go jump in a lake. She was told "You can do any stupid thing you want to!" Isn't that wonderful? 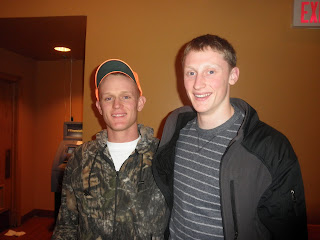 Put your hands together for Brian's brother, the one and only Dustin Jolley! Dustin was the first one to raise his hand and volunteer to be my teammate on this one—I KNEW  he'd do it! Unfortunately, there may be a bit of a scheduling conflict with his basketball team... 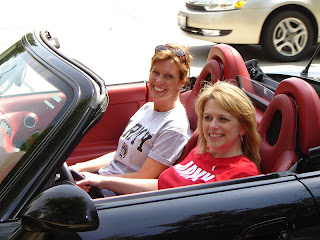 The one that's not me is Michelle.
...so their stepmom, Michelle Jolley, has volunteered to jump for him if he doesn't make it. That is above and beyond a mother's duties, isn't it? I think she's crazy.
And last but not least, Moi. Here I am this weekend, showing off a refrigerator that we'll want to crawl into to get warm after we're done jumping: 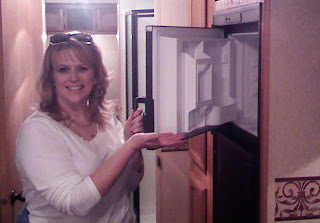 50-degrees warmer than the waterrrrrr

What am I forgetting? Oh, yes. We need your monies! We each need to come up with at least $75 worth of donations to jump! Easy-Peasy.

If YOU will click there, then WE will do this:

And together, we'll make THIS happen: 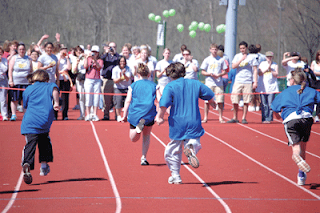 Thank you. I love you.

The more the merrier: Feel free to hit the "Join a Team" button and sign yourself up with Toys for Troops on the 27th.


Posted by Lori Stewart Weidert at 10:14 AM 3 comments: Links to this post

I was talking to my kiddo on the phone earlier this week, yammering on about a possible fundraiser for Toys for Troops, and wondering when he'd be home on leave—it would be nice if I could throw an event while he's here to represent. "I can't say," he told me. He can't say? What does that mean, he can't say? He doesn't know? or Oh! "They" are listening in, and he's not allowed to tell me such top secret information? En-way are you oming-cay ome-hay, ian-Bray?

Lord, he finally gave up and said "I was going to surprise you at work. I'll be there on Friday." But he arrived earlier. Some nice lady in the airport loaned him her telephone on Wednesday, and I got the call:  "I'm in Atlanta, I'll be home tonight."

I've written here before I had so many distractions when he deployed, and we were all so numb with grief  at the time, that we all just kind of bucked up and accepted that he was going. I've had near-daily contact with him, via the internet and telephone, which is a far cry from his first deployment. Still, when he said "I'm in Atlanta," the fact that he is home from freakin' Iraq bowled me over. Somehow, it was as if it was the first I'd heard of it. It took the wind out of me at the same time that I could instantly breath easier for his being home. What's a girl to do but hang up the phone and have a good cry right at her desk? Get it all out, honey, it will be better.... 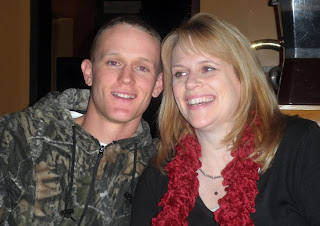 He chose the meetin' up place. You can't get THIS in Iraq: 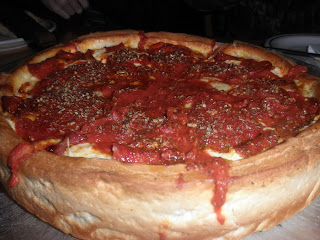 Papa Del's.
Clint and I met Brian's brother (Dustin), sister (Emily), and "other mom" (Michelle)  there, and his friend Chad delivered him to us. Brian gave me a hug and promptly poked me in the ribs, making me jump 3 feet into the air—some things never change. We chowed down on pizza and listened to his Iraq stories, many of which seemed to have a toilet theme of some sort or another, and had us laughing our heads off.

After dinner, I stole his jump drive and sent him off with his friends. Here's a few from the archives, from the last 4 months.

The first is a photo of hundreds of thousands of people on a pilgrammage to Karbala. They shared the highway for 3 days. U.S. presence isn't entirely accepted; some threw their sandals at them, and a few spit on their vehicles. Brian kind of cracked me up when he told me how mad it makes him. He wants to get out of the truck and say "Hey! Grow up! I don't want to be here either!"

I dream of a war that could end by taking both sides by their arms, making them face one another and saying "Just grow up!" 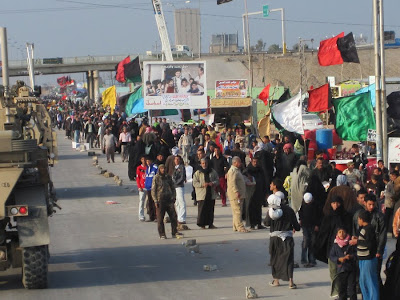 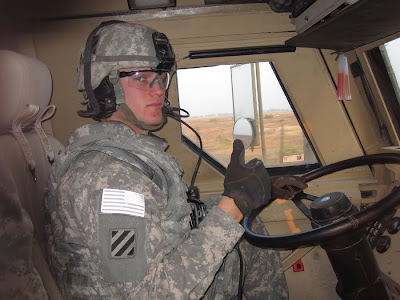 My butt is bigger than a camel butt. I gotta get back to the gym. 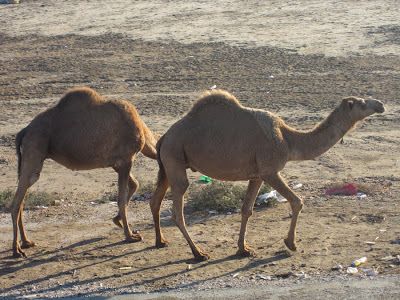 In the last 2 weeks I've had 2 soldiers home from Iraq tell me how valuable developing a relationship with the children can be. They want beanies and goodies, and will inform our guys where the bombs are in hopes of a treat. "Mister, mister, boom-boom!!" 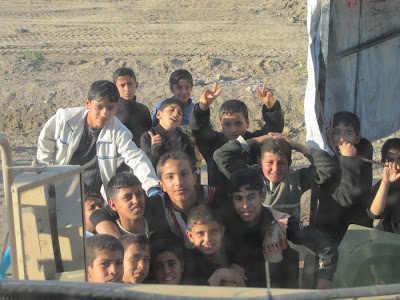 Luckily for Brian, there have been very few during his deployment this time around. U.S. military are trying to put an Iraqi face on their presence, and are escorted by Iraqi military and police on their missions. Some of what he tells me is nerve-wracking to--Moms everywhere. Security is a bit looser, civilians weave their own cars in and out of their convoys in traffic, with no means of checking their vehicles or requiring permission. Gah, that kind of freaks me out; don't think about it, just don't think about it, Lori. Breathe, Lori.

We have 15 days to rejoice and hold him tight and take too many pictures and drive him crazy with hugs and kisses before we send him back.

Oh, and I already fixed him spaghetti.


Posted by Lori Stewart Weidert at 11:54 AM 10 comments: Links to this post

I have been busy-busy, but I haven't forgotten you. 2010 is going to bring about a lot of changes in my life, and I have a window of "luxury" here in which I can determine if my future can possibly involve what I want to do, or if it will rotate more around what I have to do. I talked with Clint, and—you're going to love him for this—he advised me to try doing what I want to do.

I stewed on that for awhile. We are living in a state of construction, and while we have living space, our "spare" spaces are still full of storage and construction equipment. WHERE am I going to do what I want to do? I went back to Clint, because you know how much men like to talk. "Darling," I said, "can I haul all of that stuff out of that one little room, and can I have it all for myself? Like...tomorrow?"

I wasn't really thinking tomorrow, but Clint surprised me 2 days later, on my birthday, asking me to trudge up the stairs in the dark for a surprise: 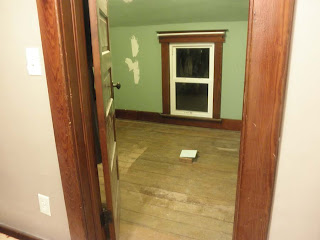 This room was FULL of storage and construction tools just 24 hours before this was taken. 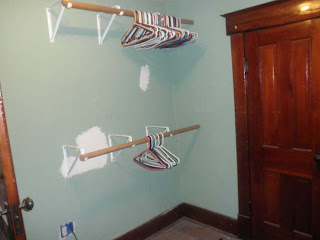 A little trip to the Salvation army cleared out this corner... 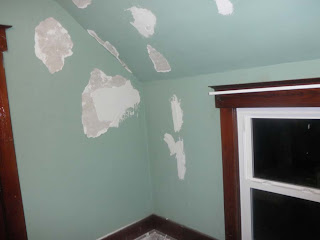 A few holes in these 100-year old walls had to be patched... 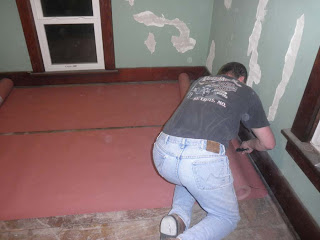 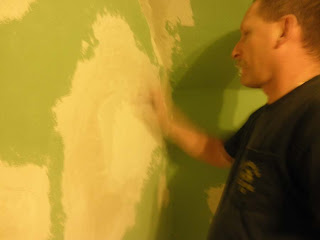 A fresh coat of paint, a good vacuuming and a thick coat of lemon oil on those floors... 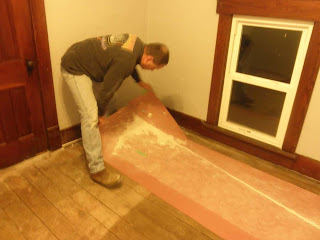 A couple of carloads of supplies from the city casa, including 1 or 2  3 or 5 paintings I started ages ago, but never finished.... 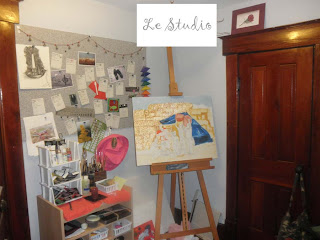 A workspace, a cozy chair, small TV, some internet, and it's time for this girl to start putting her money where her mouth is. It's a cozy little room, it's all mine, and I lurrrrrrve it.

Clint is infinitely amused that we've been working on restoring this place for almost 2 years, and the first room that's finished is one he'd put absolutely no thought into, and, before he met me, would never imagined its final purpose. I love that, when we just don't know how lovely something will be, in our future.

If you need me, I'll be at the easel.

Posted by Lori Stewart Weidert at 12:38 PM 9 comments: Links to this post