Ya'll know I filed a police report against an anonymous blog troll that had been harassing and impersonating me for 6 years. The final complaint was filed by four from this community, and backed up with statements by others, local and nationwide. An investigation turned up a 55-year old man—stranger to us all—that works for the Department of Defense. He was arrested, posted bail and is back at work, I understand. I am told by the local victim's advocate that there will be a lot of stalling in the courtroom, and that this will take a year or even years to close.

Each of the victims was issued a "No Contact Order of Protection." One in our group is pushing for that same protection for his wife and daughters, and having a difficult time getting it. Benjamin Beaupre met in a courtroom today with our troll and his attorney. While this part isn't really about me personally, I am tied to it, and so, very interested in the outcome.

The outcome was not so hot: troll's motion to dismiss was granted, but a new date was set for Beaupre to file amended arguments for the order of protections for his family.

I received a copy of the petition that was filed in court yesterday, and thus, some insight on what may be in store for the rest of us. I am amazed at some of the smoke and mirrors. For instance: 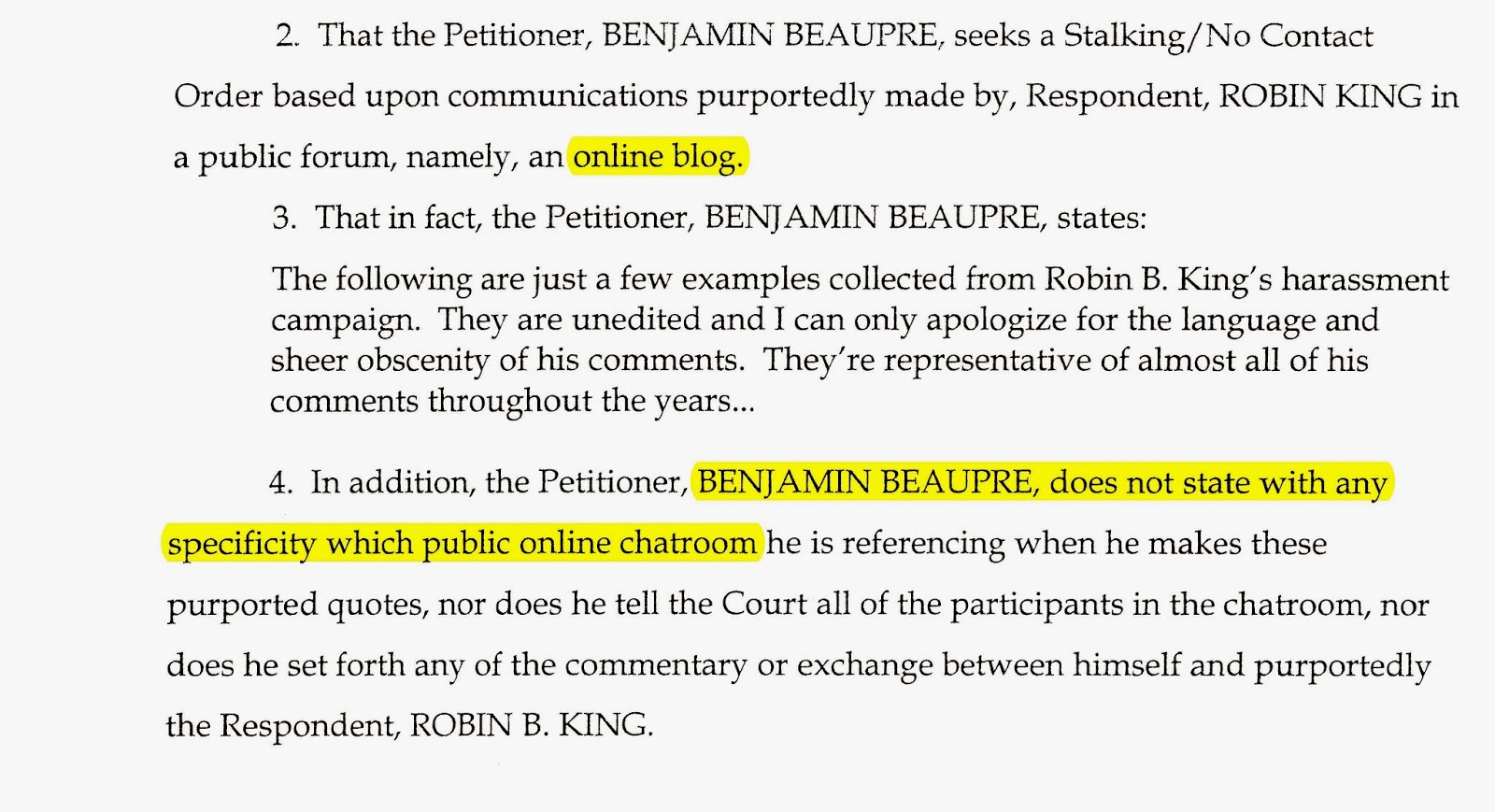 Note here how the terminology skipped from Ben's "Online Blog" in #2, to a "public online chatroom" in #4. It is referred to for most of the rest of the petition as an "online chatroom."

Tomato-tomahto, you might say, but a "personal blog" and "an online chatroom" are two entirely different things. Here's how I see it: Say you take your little old self to a restaurant, and there's a filthy loud-mouthed stranger across the room. That would be the public online chatroom in this case, ok? If you don't want to listen to that filthy guy, they you leave the restaurant.

Moving on with my analogy, let's say you wake up one day, and there's a filthy loud-mouthed stranger in your living room. That—for the sake of explaining the difference here—is your personal blog. It's your living room. You can let him hang out there if you want to, and mouth up the place, or you shut him up with your moderation tool. Yes, this imaginary living room has has a moderation tool, like a trap door, or an ejection seat or something, in which you can push a button and make him leave.

So, you're all clear now, on the difference between a "Personal Blog" and a "Public Online Chatroom" now, right?

Now, for the sake of more crazy talk, let's say the stranger never really shows himself in your living room, but instead ties a filthy note to a rock and tosses it through your window every Saturday night for years and years. Filthy, racist, sexist, unnerving notes. And let's say your name is...pick a name..let's say your name is ummmm, "Earring." Ok, and then the nasty notes start flying through the house, but now they are signed "Earring Killer."

Also, in this story, notes on rocks through windows are covered by free speech. So, you have no recourse there, rocks and notes are allowed. Even if they weren't allowed, you never ever know who threw the rock, so what do you expect the police to do? In the end, your choices are to move out of your living room altogether, or to just deal with the weekly rock through the window.

You just deal. You don't have to read the note if you don't want to. You can throw the rock back out the window, or you can just unwrap it and save the note. (Always save the note, by the way).

Anyway, back to reality, and the petition that was filed. (This is real now, that living room stuff was for-pretend, ok?) Here's some more text for you, scanned right out of the petition:

So. Did our troll engage in a course of conduct that would cause a reasonable person to fear for his or her safety, or the safety of a third person? That was what was on the table today. Our troll and his lawyer say "No."

One of the women in this case only filed a report because she wanted him to go away and be done with it. She is frightened, and wants just to be left alone. Another has his mugshot posted on her refrigerator in her home, and in her office at work, "so I remember what he looks like, and everyone around me knows to look out for him." Ben is the hypothetical "Earring" in this story. I sleep with pepper spray on my nightstand, and I have a weird mental "plan of escape" in the event that I hear an intruder in my house.

Why? Because anyone that would spend most of their Saturday nights, and many of their Fridays, and a few weekdays, writing and sending you a constant stream of vitriole of murder and rape and genocide and sex and name calling for six years is unhinged, and yes he fucking has conducted himself in a manner that would cause any "reasonable person" to fear for his or her safety.

Lord help us all. There are 6 more pages of this stuff, and even though it's a matter of public record, I asked Beaupre for his blessing to express myself here. Asked and granted. Today's trial was his, and the outcome his disappointment, but ours also. I watch to see what we'll be up against.

I pray the State's Attorney is watching carefully also, and the Judge understands these online nuances and takes them seriously. Currently listed as "electronic" stalking avenues are "text messages or emails." I realize that it's unlikely there will ever be a law that says you can't leave nasty notes in public forums, but seriously, what this guy has done is not a matter of free speech, as his attorney is claiming. Anonymous bullying and harassment really is a a modern-day note-on-a-rock for today's cowards. It is threatening and terrorizing, and the sooner legal boundaries are established against it, the better.
Posted by Lori Stewart Weidert at 9:48 PM 3 comments:

It is time for me to clean out my mother's house. I've had an "I'll scratch your back if you scratch mine" agreement with a family tenant: Live here for me while I catch my breath, will you? And now that I can breath again, I've been tending to the stuff.

There is both very little left to tend to, at the same time an overwhelming amount of Stuff. The stuff-stuff: blankets, pillows, knick-knacks, spatulas, spoons, vases, screwdrivers, funnels, bandaids, lamps, step stools, thumbtacks, Dial soap, board games, dog collars...Oh, my God, the stuff.

I am armed with boxes and Hefty bags, and I am begifting, donating, selling, and tossing.

To be honest, I am such a poor waif when I am there. This is the loneliest, heart-achiest thing I have ever had to do. It is all mine. When I say "mine," I mean, my obligation. I hold the gavel: This goes here, this goes there, you get this, you get that. That is overwhelming in itself, but "this" and "that" really mean nothing to me. I already have, after all, spoons and spatulas.

What does me in and sends me home early most days is that I am the last one standing.

Sigh. It is what it is, you know? While my heart breaks, some days, there are others in which I do nothing but laugh and laugh while I am there. I ran over there today in hopes of digging up something to put my own pencils in, and instead got sidetracked with an old recipe box. As I sort through this "stuff," I do have a mental list of what I hope to find, and today, I hit gold:

The Recipe for my Great Grandmother's Homemade Rolls.

When I was a 10-ish years old, I had the wherewithall—or as is probably more the truth, someone prompted me—to ask my Great Grandmother to show me how she made her homemade rolls. She just made them like I would make an omelet or something: Just get up, move around the kitchen, and make the rolls. 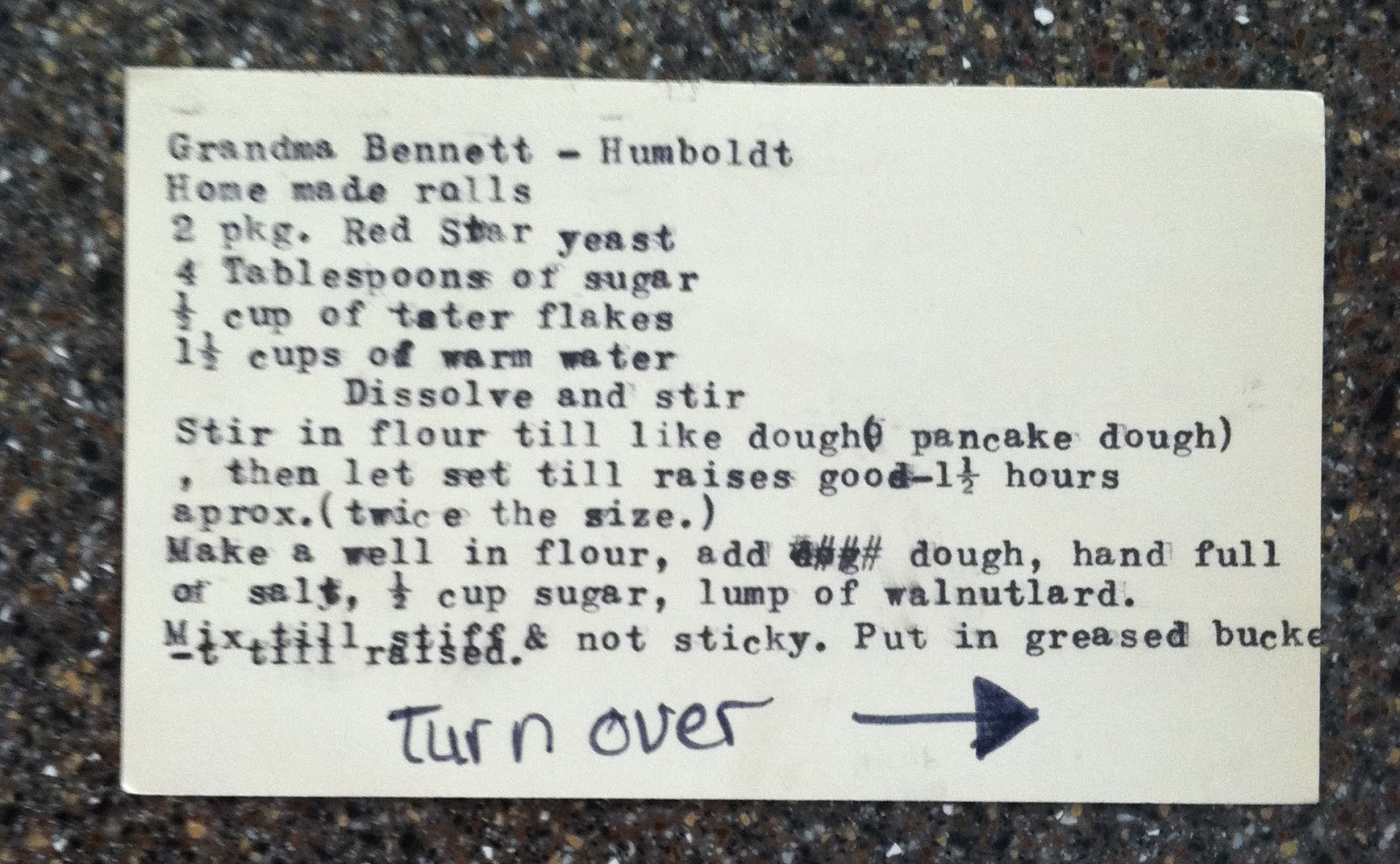 (And thus my typesetting career began...)

There it is, word-for-word, how she taught me. Please note:

1. Tater flakes. I'm sure that's exactly how she said it, "add some tater flakes," and

2.  I remember having to insist on measurements: 1/2 a cup is about how many tater flakes we determined, as did we 1-1/2 cups of warm water.

She drew the line at measuring flour—measuring flour was nonsense. Just enough until it is like...pancake dough (?) And then, after the first rise "Make a well in the flour." She had a giant porcelain pan of flour in the pantry:  The goo went in, you kneaded it around until you had what you wanted—be it bread or noodles—and then you lifted it out and the put the flour back into the pantry.

The remaining instructions were par for the course: "A handful" of salt, and a "lump" of walnutlard. Walnutlard? Walnut lard? Is Walnut a brand? Or is there such a thing walnut lard? And how much is a lump? Does it come in lumps, or does one scoop out a lump?!

In the end, we are to put the whole thing in a "greased bucket" til raised.

On the back of the card, it says "Bake until brown."

Seems I am in for a little experimenting. I don't know, for example, what comes between "greased bucket" and "Homemade rolls to die for."

What I do know is that I'm going to find out, and master, and write it all down, and that these are the treasures I will continue to uncover while I sift through the "stuff." As resistant as I am to muck through it all, gnashing my teeth and crying, I am just as often comforted and laughing with those on the other side, and know that they are with me while I work.

These are hard times. These are hard, and lovely, times.
Posted by Lori Stewart Weidert at 11:53 PM 3 comments: