While puttering around the casa a couple evenings ago, I received a text-e-mail from one of Da Girlzs, Georgie, updating all of us on her travels, the men that are chasing her newly-single self, and the fact she'd just bought herself some great shoes. Oh, and when are we having Girlz Night, again?

We sent a few lines back and forth, and then this one came in from her: "I just tried to send you a picture of my new shoes. I don't know if I did it right."

I checked the picture, and mailed her back: "No, that was a picture of that guy that smells like corn."

When this picture finally came in, I oooo'd and ahhhh'd, peaking Clint's curiosity. "What?" 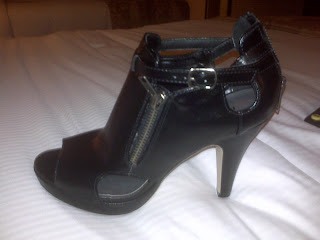 I handed him the netbook to show him the photo.

He squinted at it, then said "What's that?"

"Because she got new shoes."

"She got new shoes."

"The story is: Georgie got new shoes. And she's showing them to us."

Then I gave him a look that said "What is there to understand?"

He returned the laptop with a "women are weird" shake of the head.

That's the whole story. Now, I'll be curious to hear how many women "get" this, and how many men have no idea what this blog is about.
Posted by Lori Stewart Weidert at 8:48 AM