I have some extra time, and I have a lot of cool photos from our epic 5-day roadtrip, so guess what? It's share time!
These are from Cripple Creek, a gold mining town in Colorado. We started out in Manitou Springs, drove around Pike's Peak and into downtown Cripple Creek. The website for Cripple Creek advertises "Gaming, Heritage, Shopping, Dining, Recreation, Events, Lodging, and Attractions." If you only have a few hours to spend there, however, Cripple Creek offers "Gaming, Gaming, Gaming, Gaming, Gaming, Gaming, aaaaand Gaming." For the most part, it's a beautiful, historical 3-block downtown area full of casinos. We hadn't banked on that, but we still had a nice time walking around, and poking our heads into a few shops.

An old gold mine: 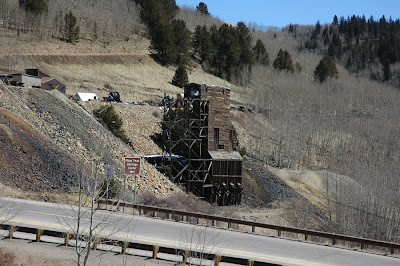 Shooting from the hip.: 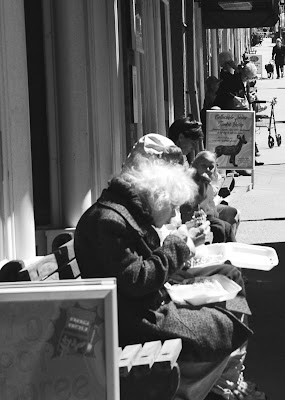 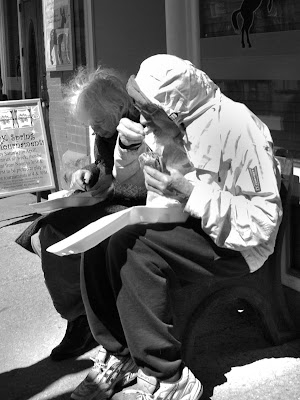 We met a charming lady that bought an old casino and turned it into an antique shop, a tea parlor in which she held formal tea parties, and an art gallery. It was an enormous building, and it was, she said, her "weekend hobby"—she had a "real" job to tend to also. You think I have energy? This woman could run circles around me. 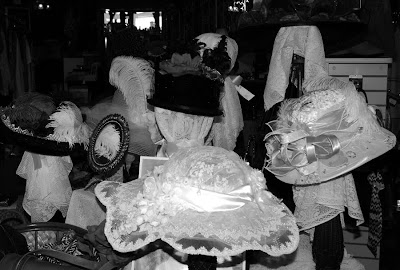 Many of our shots were taken out the window while we were zooming down the highway. This advertisement catches your eye more than a dumb old sign, doesn't it? 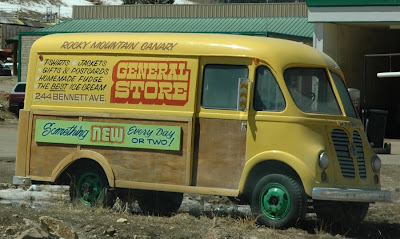 $5: Fudge or Quarter Slots? Hm. Either way I'd be out $5, and slot machines don't go straight to my hips. 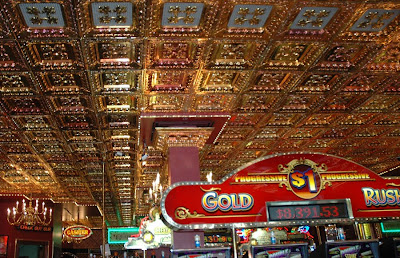 
This sign was just on the edge of town when we left. Please be careful, the Visitor Information* lady told us; "there are bovine on the road." 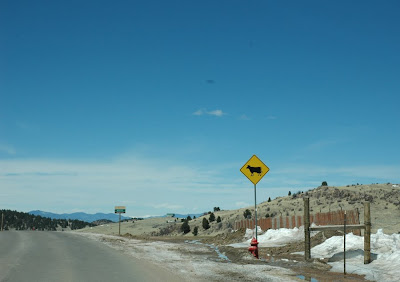 
*Sidenote on the Visitor Information Center. The caretaker lady explained that there was a charge to see the museum and lookout point at this particular stop. Needing only a map and a restroom, we opted out. Still, when Clint went to use the Gents', I noticed the sign behind her desk read "Free beyond this point." Oh! Free? Well, then I'll just go on in. The fee must be for whatever wonders were stored on the second story of the building, yes? I wandered around looking at pick-axes and taking scenic photos with abandon.

When Clint reappeared, we took off. Just as the door was closed behind us, I spotted the sign again, and noted that it read "FEE beyond this point." I stood paralyzed in the parking lot for a minute...and then I just got in the car. I can imagine that woman's take on us: "People are so rude; I told that woman she had to pay for a ticket, and she just went right on in."

It's so fun how we never get bored.

Posted by Lori Stewart Weidert at 10:17 AM 4 comments:

Clint and I took a road trip around the country last week, mapping out a few interesting—and, admittedly, a few very uninteresting—stops along the way. I've always been more of an "off-the-beaten-path" traveler, and I'm giddy to have found me a man that's on board with that. Give us a narrow road to unknown treasures over a blinking neon arrow to a tourist attraction any day.

The "Giant Coffee Pot" stop on Thursday turned out to be a bust, but the accidental breakfast that we found on Friday morning more than made up for it.

We pulled over in Ogallala, Nebraska. A small ranching town, we had a hard time finding a restaurant of any sort, so pulled into a gas station to ask for advice. We were directed on down to, and I quote, "the sale barn."

Breakfast in a sale barn? Yay! Ok! What's a sale barn? We scooted down to find ourselves at at Kathy's Kafe, at the Ogallala Livestock Sale Barn, and parked in a big dusty lot next to cattle pens. The  aromatherapy and white-noise (mooooo!) made for instant interesting ambiance.

When we walked in looked around, we knew we'd hit the jackpot. "Yes!" ::fist-bump:: We found a booth, and the waitress promptly brought me coffee, "hon." I love it when waitresses call me "hon." 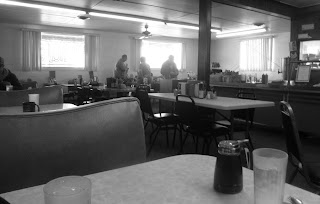 Our orders were placed, and we could see into the small kitchen where ham was promptly sliced, and sausage was pattied. Clint ordered the Ham 'n eggs 'n pancakes: 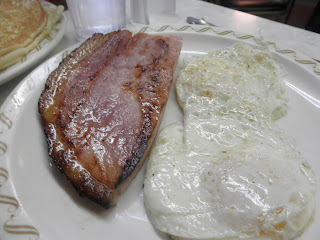 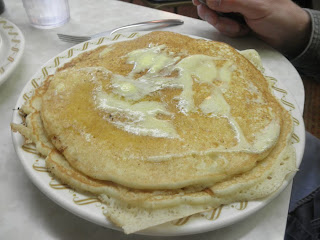 I never order sweets for breakfast, no pancakes, waffles, sugary cereal. Still, I had to have a bite of Clint's pancakes, and they were to. die. for. They tasted like they were made out of vanilla cake batter. I had another bite, and maybe another, even though I do not like pancakes, I mean it, now. But I would eat these every day if I lived in Ogallala.

And this was my breakfast. Ah, nothing like a stick-to-your-ass ribs breakfast to get you through 10 hours of rasslin' cows riding down the highway in luxury. No, this was not on my diet, but baby, if I'm eating with cowboys, I'm by-God going to eat like one. 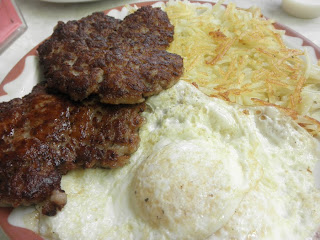 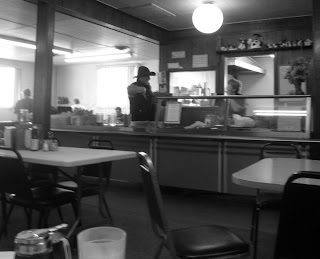 And the cows to go with them: 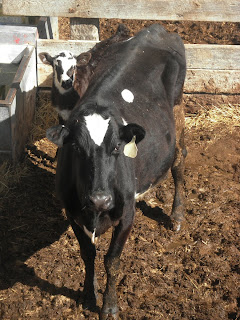 The sale pens next to the livestock barn had stairs to an overpass so that you could walk up and check out the wares. A cowboy's jewel case. We wandered up after breakfast, and watched a few cows being herded out of barns and into trucks. They didn't care for us that much. They raced toward us, and came to a screeching halt when they realized we were standing overhead, and refused to go under the "bridge" we were standing on, until a—what—a cowpoke? A cowpoke sauntered up behind them and hit a plastic thingy on the ground to get them going. "Get along, little doggies." (He didn't say that; wouldn't it have been cool if he'd said that?

Oh, I can't get along little doggiee....

Kathy's Kafe at the Ogallala Livestock Barn. It really was our cup o' tea, and you must go there if you're ever meandering through Nebraska.

Posted by Lori Stewart Weidert at 1:00 AM 20 comments:

A blog is a broadcast, not a publication. If it stops moving, it dies.

I have to get to work.
Posted by Lori Stewart Weidert at 9:26 PM 2 comments:

Brian's been back in Iraq for a month or so, and I'm still laughing at some of the antics that transpired while he was home. These boys have been hanging with my kid since they were in grade school. 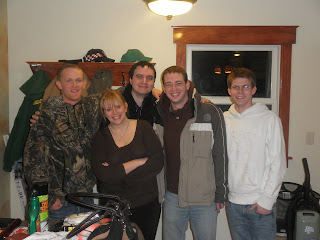 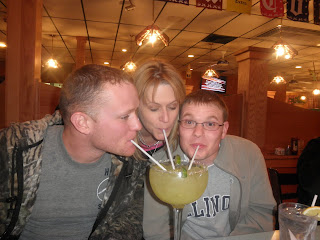 (Just so you know, this sort of thing didn't start
until they were well out of grade school. As far as I know.) 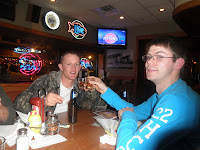 I met Brian and Kyle at The Esquire on one of those windy, blizzardy evenings. Big decision: Country roads blowing shut vs. an evening with my kid & Co. before he goes back. Hmmm. Snow, schmo. I met them out with the stipulation that I was cutting out early. 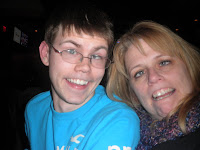 We spent a couple hours eating and talking and laughing and discovering fascinating things about one another. For instance, Kyle and I can both do this —>: 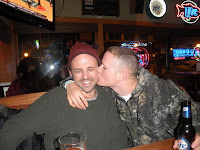 And Brian, after a few shots of something strong, enjoys surprising his photo-mates. We'd called our friend Mark out into the bitter weather. No doubt he's regretting his decision to join us now that I've posted this photo.

I was bundling up to leave them to their evening, when Brian started begging me to come out with them to do donuts in the snow. Uhhh...yeah....NO. Noooo thank you. I knew very well that if I had gotten into Kyle's car with those boys, there would have been more than donuts on the menu: I would have found myself airborn while they high-fived one another at how loud they'd just made me scream. Mark was brave enough to join them, though, so I bid them adieu.

Kyle's car is an old Toyota with about 40 million miles on it. It has the funniest horn sound *meep meep* that makes you laugh your head off. Earlier in the week, Brian had talked Kyle into doing a burnout with the Toy. Listen carefully to hear the horn once he burns that baby to the end of the street.

So, that was The Donut Machine for the night that I bowed out, and from here on, this is probably going to be a "you had to be there" story, or at least, "it was funnier when Brian told it" post.

They headed out to a big parking lot, and began screaming around the light poles and medians, donuting as much as the little car could donut. Here's my graphic representation of the story as I heard it: 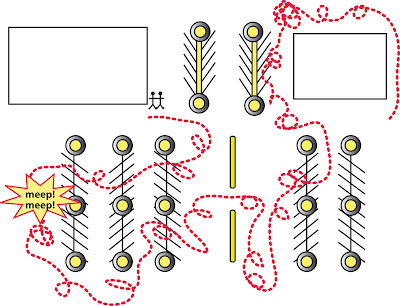 After spinning and screaming all over the parking lot, Brian noticed that there were 2 guys standing on the sidewalk, watching them the entire time. When he pointed it out to Kyle, he *meep-meeped* at them, and then sped on over to say hello. Brian rolled down his window on the approach, and asked "How do we look?!!"

Ok, you have to say this just right for it to be as funny as it as. Read it outloud, real cool and slow, like. Ready? [start reading outloud]

And they sped off.

Are you laughing? Because we did; we repeated that line over and over about 700 times in the next week Brian was home. Brian even admitted to repeating it outloud to himself when he was home alone, and cracking himself up every time.

Ok, well, if I told it wrong, here's something that will REALLY make you laugh:

I present to you: Mr. Anthony Dobbins, doing his Christopher Walken imitation.


C'mon, I know that one got to you. God, these boys still make me laugh.

3 years or so ago, when I was just establishing Toys for Troops, I received this e-mail from a young lady in the area:


My name is Jerrica Kuebler, and I have quite a few Beanie Babies I would like to give to you, if you're still collecting them. I'm actually in the process of joining the army, and will be leaving for basic training at the end of September. So if I could meet with you to give you the Beanie Babies before then, that would be great.

I met her shortly thereafter. A petite, beautiful girl, I'll admit to being stunned at the idea that this one was going to bootcamp. She was the first young woman I'd met that had enlisted, and in the 5 minutes or so that I spoke to her before I bid her Good Luck and encouraged her to keep in touch, I developed a weird maternal ache. I know what it's like to send a son off to bootcamp. To send a daughter? This little thing, a soldier?

I lost track of her when she took off, and then got another e-mail from her a year later:


I met you along time ago when you were collecting Beanie Babies. I am now in the Army. [...] me and my roommate would each like to get a soldier's name and address to send them a care package. If you could please get back with me at your earliest convenience.

First she gives me beanies, then she's sending care packages...and then she herself was deployed, to Afghanistan. She was kind enough to send me the names of several of her colleagues, and they made up the majority of our female soldier babies on this year's care package mailing list.


She's nearing the end of her tour, counting down the days. It sounds like she's ready to come home, and yet, had one hell of a last hurrah this week: 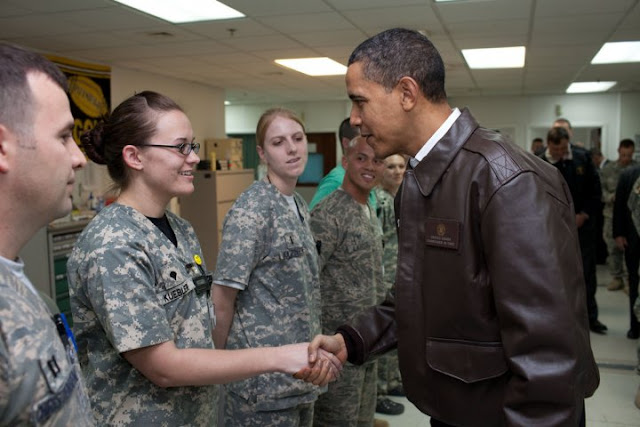 This was an exciting day for an amazing lady, and I hope Mr. President realizes, someday, who he just shook hands with.