Something Ate My Cat

You see, THAT is the sort of Catchy Title that I haven't been able to get away with for the last several  years, because of the nasty blog troll that I referred to in the last post. Can you just IMAGINE the comments I'd have gotten about something eating my cat?!! Oh, I hope he's reading now, and he's just beside himself.

Yeah, so that's sort of how I've had to process every word that comes out of my...um...fingertips for the last several years.

Anyway, something DID eat my cat, or at least, something bit her up pretty good.

My little baby Minxy girl is an INDOOR cat. We warn her, often, of the repercussions of her wild desire to get outside: "Raccoons and coyotes, and things will eat you! No, cat! You can't go outside!" 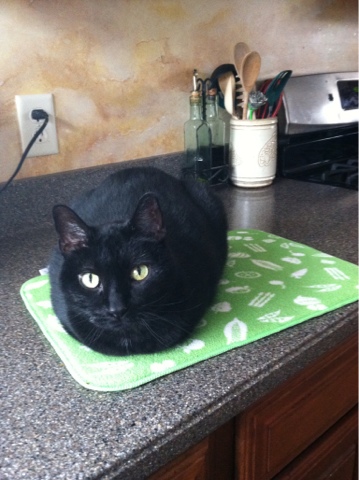 (Just for introductions' sake, here she is, hairin' up the food drying mat that she is forbidden from sitting upon.)

Still, last Monday morning before 6 a.m., after the cat had NOT been outside, I swore, she came crawling up the stairs crying. Crying, I tell you, like a little baby.

I'm probably a little too proud that I still have my innate maternal instinct: I came flying out of my bed like I used to when Brian had a weird little cough in the middle of the night. You know that cough where the kid goes ::cough:: and you manage to get a bucket underneath him before ::gag:: and ::BARF:: follow, milliseconds after?

Yeah, I still got it.

Only now it's with my daughter. I mean, my cat.

Oh, crying she was, and she couldn't jump up to tell me what was wrong. I lifted her and she cried some more, and when I checked around, I found one tiny little spot on her back. A spider bite? What in the heck happened? I set her back down to rest, and began fretting and worrying while I got ready for work.

By the time 8:00 rolled around, she'd holed up in the closet, and when I reached for her, she was crazed with pain. She screamed and hissed, like Linda Blair, in the Exorcist. I called the vet, and luckily they had an immediate opening.

While she was on the exam table, the vet questioned me several times about whether she'd been outside? Ever? This weekend? No, no, and no. She'd gone into our closed garage when I took out the recycling, but I'd been home with her, otherwise, and no. She found offending spots, however, and when she shaved Minx's hind end: 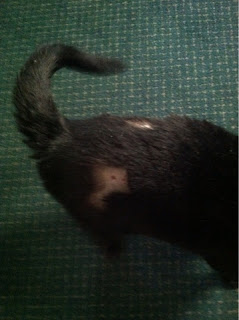 The vet stood tapping her foot, and really, all I could do was shrug my shoulders, and speculate that we had a critter in the garage.

A shot of painkiller, a shot of antibiotics, and 10 more days of pills, and we were on our way home, still clueless.

I called Clint to give him an update, whereupon he pointed out, "Well, the downstairs bedroom window was open Saturday, and the screen was up." Um, what? I HAD been vacuuming Saturday, and when I worked by the window, threw it up for some fresh air. He had been out mowing, and when he finished up, came in and shut the window.

Apparently in the interim, Minx decided to sneak out the window, get all gangsta with some unknown critter, and then managed to jump back in, in less than an hour it took to close and lock the window back up. It took 2 days for the infection to set in.

Sigh. We don't know what she scrapped with, and we'll never know who won. We've had a plethora of raccoons, groundhogs, squirrels, and--oh Lord--skunks in the yard this year. Clint found a bat with a leg missing 2 days after the day I took her to the vet. Did she chew the leg off of a bat?!! We determined, after the bat died, that it was too small to have inflicted the wounds on her hiney.

A mystery. Minx is alive and well, and back to her old self, even though she's looking a bit baboon-esque with her fancy new haircut. 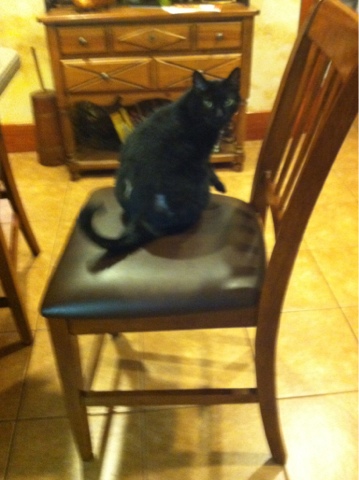 She is also grounded for life.

On another odd note, that troll that I referred to in the last post, and that I swear I'm going to stop talking about, after I'm done talking about him, always said something nice to me when I posted pictures of Minx. He'd say stuff like "maybe you aren't all that bad, since you have a cat."

I share this tidbit with you now just to give you an idea of the mental hurdles I've had to clear to keep writing for the last 6 years. I am only now beginning to acknowledge them. "You can't shut me down!" I thought. Clearly, he did though. I pussy-footed around my words. (Ohmigod, I just said pussy-footed.)

TROLL! Stop looking at my cat!