Driving the Midwest and 2012 Toys for Troops Christmas Event 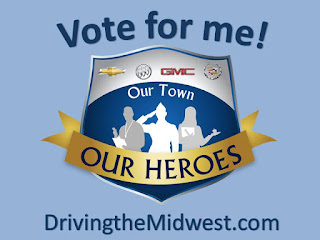 My cup runneth over, these days. Just as I am gearing up to push, push, push the 2012 Christmas Event for Toys for Troops, I have been nominated and accepted for General Motor's "Our Town, Our Heroes" contest.

I suddenly find myself promoting my cause—which is easy, because I do love my soldier babies—and also pushing *myself*, which I find incredibly difficult.

But if I rally for votes, I stand to win $500 in gift cards, or one $500 gift card, or something, which will come in handy for Christmas gifts for my soldier babies, so rally I will. Because: 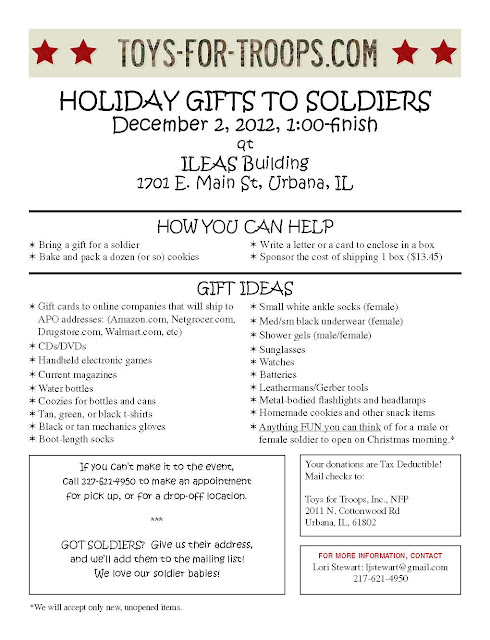 There you have it. I am scrambling, because WE need:

In the meantime I promote TWO events simultaneously and count on those listening to me knowing that I'll hush up in just a minute when this big thing is over.

It's been a bit of a media frenzy. Newspapers, radio stations, and tv stations have picked up on these things, and I still have to summon courage to face them all. Today I asked a radio interviewer to let me know whether I was going to be live or recorded, "so that I will know how nervous to be."

In that interview, I was asked the one question that I am asked over, and over again: "Why? What does it mean to you to do this?"

The first time I was asked that question in a television interview, I broke down on camera. My son was about 10 weeks into his first tour that lasted 16 months. To feel so helpless, and then to have stumbled on something that contributed positively to his day, and have it branch out to his comrades, and then to other troops from all over the U.S....

Well, it was so just much better than being able to do nothing.


After 6 years—after waiting for my son to come back from Iraq twice, after meeting hundreds of other soldiers and their parents, spouses, siblings, and children, hanging out on a few army bases, working with Veterans, Warrior Transition Battalions, and Family Readiness Groups—doing nothing remains out of the question for me.

I still cannot answer that question--in front of a camera, on the telephone, or in writing—without crying.