It's 7 degrees outside, and a few of us here in my workplace are wrapping up our last few days of employment. There is no work,* so we surf the net, pace, and worry.

This morning we indulged in some comic relief. Kurt asked me, "have you seen those YouTube videos where you throw boiling water into the air and it turns into ice?"

We boiled a pitcher of water and designated jobs for ourselves: Me the photographer, Kurt the spinner.

Crikey! It works! We tried it again, but mixed a bit of blue acrylic paint into the pitcher. A big blue cloud! That's what we were hoping for!

Not quite. The blue water seemed to be a lot clunkier, but I think it was Kurt's fault: he should have spun faster, and I told him that right to his face. I explained to him that our chances of winning $10,000 on America's Funniest Home Videos would be greater if he got dizzy and fell down afterward.

One more experiment, this time with the lid off. I think this one made the best impact:

*Note to potential new employers: I reiterate: There is no work. I would never goof off at my job like this if there were. Thank you for your consideration. Please hire me.
Posted by Lori Stewart Weidert at 11:43 AM 4 comments:

Note: Snow days aren't quite as exciting when they're eating up two of the last 10 days of your wages. Still, with no work to do at work, there simply wasn't a reason anyone could make up for us to justify schlepping in, the last 2 days. The office was closed, C-L-O-S-E-D.

It was odd to get a preview of what my Tuesdays/Wednesdays might be like a few weeks from now. Kind of nice. Except for the not getting paid part. Aurgh, let me not think of it, and show you a few pix from yesterday. 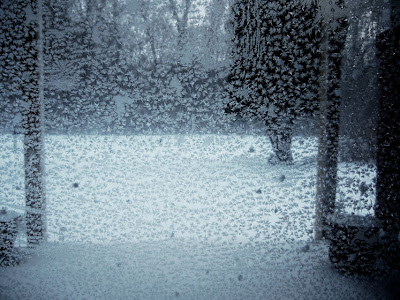 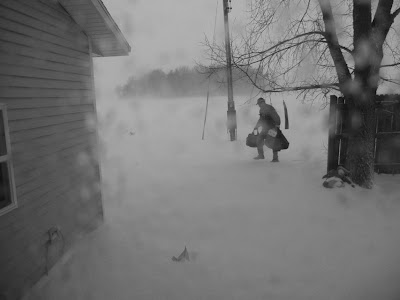 8:00 a.m. One nice thing about living in the country is that the snow does kind of even itself out over several acres, instead of  drifting into a 4-foot pile in front of your door. Still, it has to be moved out of the way before anyone gets in or out. 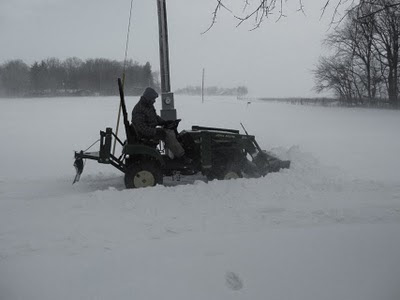 Our finch feeders were packed with visitors all day long. I was happy they have somewhere to go for dinner, but worried about our blue jays and woodpeckers, as a deer (we think) knocked down and broke their feeder the night before the storm. Fret, fret. 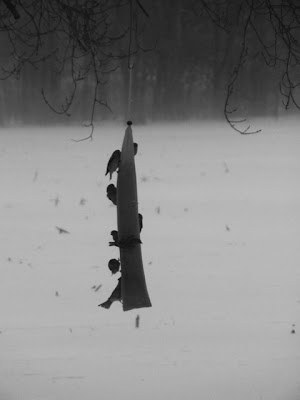 The roads weren't cleared yet, but Family Services was closed, so I had to get out to tend to Mom. Clint was sweet and drove me over. Sweet—or worried I'd end up in a ditch and he'd be the one to pull me out. Either way, he chaperoned me over to Mom's house. On the way back the roads still not had been plowed, so we got hoot and holler when we picked up speed to make it through a few places drifted shut. Yee hawww!!! 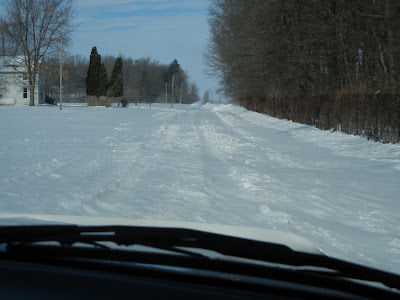 I made him stop to let me take a picture of some deer babies. There had been several standing here, but our stopping spooked them, and the scampered into the brush. I managed to just catch this one before it followed the rest in. 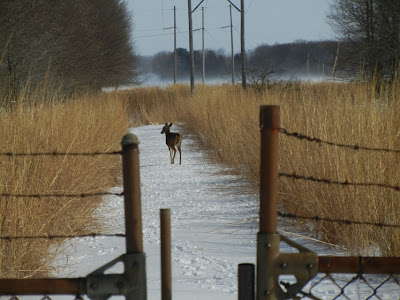 Just on the other side we spotted an entire herd of deer, but they were so well camoflauged that the pictures didn't turn out well. 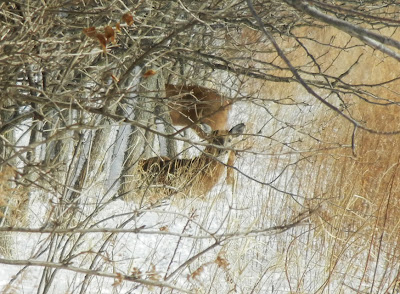 After that, we got home, we didn't do much but putter around the house and stay warm. 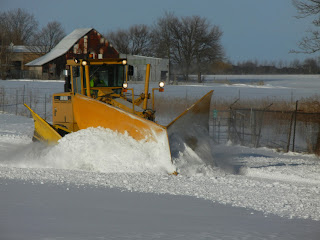 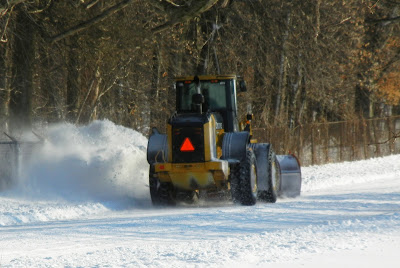 Back to work this morning, Thursday feels like Monday after two days off, and I can't believe tomorrow is Friday. The time was good, lots of time to rest, and to think. I feel good. I may even be, naively, happy, and excited about the future.

I'm finding out that sometimes it can be a good thing when circumstances are simply out of our control. Tossing up our hands and riding out the storm may sometimes be just what we need to clear our heads, and find a new direction.
Posted by Lori Stewart Weidert at 2:31 PM 4 comments: