As the onset of Spring brings joy to most midwesterners who are sick and tired of winter, a friend once shocked me with her declaration:  "I hate spring!" Whuh...What? Robins! Sunshine and warm air! Daffodils, and buds on the trees!

And, she reminded me, snow and sleet, and slush. Mud and raincoats and wet socks. Gosh, when she put it that way, I realized: Spring does kind of suck. All of those things are pretty miserable.

In the last 10 days, the weather has run the gamut. It has been balmy and it has been rainy. 8 inches of snow a week ago kept most of us home, and then most of it melted away 2 days later, turning the countryside into a marshy, swampy, muddy pit.

As mucky as it all can be, I still can't help rejoicing about spring. The galoshes are pulled on when it's time to fill the bird feeders. The house is still chilly and I wrap up in fleece early in the evening, before I settle down with last year's garden journal, to figure out what I will and will not plant in this year's.

And while I am wrapped up, either inside or out, the view at the Casa is still often pretty magnificent, no matter the weather. 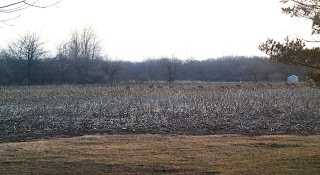 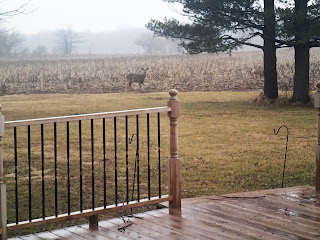 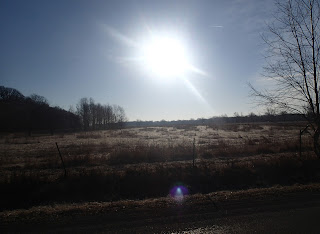 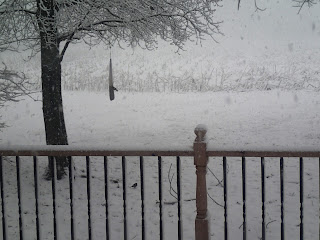 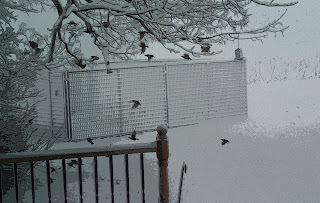 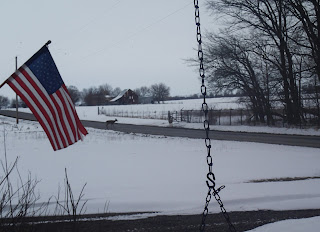 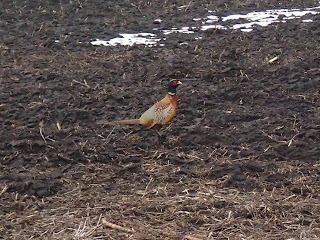 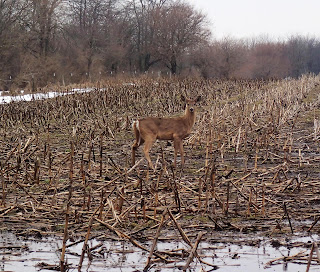 Does anyone remember my coffee shop days, when I first started blogging? I would meet a gaggle of  friends on weekends, and sit at the outdoor tables. We'd talk, and blog, and check out icanhazcheezburger on someone's laptop. Once my friend Momo and I tried to teach ourselves how to knit, and failed miserably. We drank gallons of wine (collectively, not all in one night), watched cars and people, and would most often end up helping our favorite baristas chain up the chairs at the end of the night.

We created nicknames for people we hadn't met yet, bought a sandwich or two for a few local characters, and created stupid games amongst ourselves.

One of the stupid games we played was at the expense of poor parallel parkers. The first of us at our table to spot someone struggling to park their vehicle would scream FIVE DOLLARS! Making the first call entitled you to five dollars if the driver hit the car in front of or behind them. Only, no one ever got the five dollars, because there was no five dollars on the table. It was an imaginary five dollars.

But it was the game.

Clint and I were recently having dinner at the bar across the street from that coffee shop, and turned around to watch someone in an SUV making an attempt to get one of the front parking spots. The driver—I will not reveal her gender for fear of your discriminating against us—had about 4 feet in front of her, but to our amazement, BAM BAM BAM BAM...just kept backing up and hitting the car behind her.

Oh, it was a nightmare! Still, I could not stop screaming "FIVE DOLLARS! FIVE MORE DOLLARS! FIVE DOLLARS!" It was terrible, and I kept laughing gleefully every time she rammed into that car. As if I were at a demolition derby, for heck sake. Clint, and others around us were amused—I mean, it was a quite a spectacle—but not nearly as giddy as I was over the whole thing.

Oh, how I miss my coffee shop, some days.

Welp, that's the whole story, and the moral of it is: If you're telling yourself that all of the people along the sidewalk aren't paying attention to the way you park, and so you shouldn't be nervous...well, yes they are, and they are winning imaginary money off of you.

Do as I do, and go find a parking garage.

Sidenote: Clint and I did cross the street when we left; there was no damage to the car that had been repeatedly bumped in this story.
Posted by Lori Stewart Weidert at 8:15 PM 6 comments:

Start Out By Thinking

I've mentioned before, about a hundred million times, that I worked for 24 years with one company, before it closed 2 years ago. While I loved the work, after that much time I wasn't necessarily challenged. I used to joke that if they left me with a computer and a keyboard, I could still do my job if they removed my monitor.

The temp job I landed at the University wasn't terribly stimulating either. In a small, over-staffed office, my only bragging right was that I had custody of the key to the cabinet that held the red pens.

Fast forward, and I'm back in publishing and books, doing work I love. Internal restructuring 6 or 8 months into the new gig left me with more responsibilities while I was still getting my chops. That is, I knew how to do the work, but I was still learning how they do the work. On one hand, I was confident and sure. Publishing is publishing.

But internally, sometimes, my initial inner reaction to any question was thusly:

Lori, do we need to order more of this? 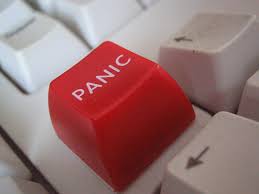 Who is is this vendor?

Where did this money come from? 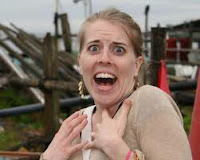 Can we get a refund? 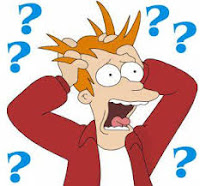 Is there a contract?

It may be true that my initial responder can be a bit of a drama queen, but one thing I have going for me is my ability to drama down.

Also, I take advice from children. Shortly after I got news of my new role, I came across this image: 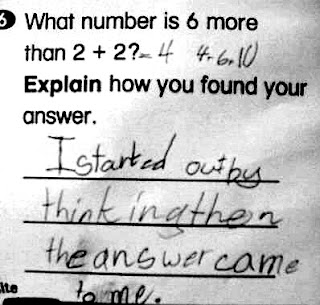 I laughed then, and I laugh now. I think all too often we run around squawking and creating stress and chaos over ridiculous crises, and really, all we need to do to fix a thing is to start out by thinking. Stop bitching, stop panicking, and stop making this bigger than it is. Think, for a second.

And the answer, or how to find the answer, always comes to me. In the workplace, at home, in personal relationships, in business transactions, or even spinning out on black ice on a country road: Shut up and use your damned brain for a second, Lori.

Sometimes the answer is just a matter of Google Search. Sometimes I have to get the answer by asking someone else that has the answer. And sometimes I come up with the wrong answer altogether, I end up in a country ditch, and I have to start thinking all over again.

It still remains that a great deal of my solutions can be found by following this kid's advice.

I wish I could find him, and tell him that his words of wisdom hang on my cubicle wall.
Posted by Lori Stewart Weidert at 9:49 PM 6 comments:

When I was 28, my best friend confided in me that each of her friends served a different role in her life. She had a party-girl friend, and a soul-searching friend, and a no-nonsense friend.

I was that third friend. Unwavering. Right and wrong. Black and white. I was newly divorced, and was going to do a damned good job of raising my son. 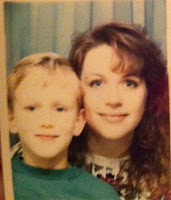 I had a decent job. I freelanced when I needed extra money. I owned my own house, mowed my own yard, changed my own oil. I didn't ask your opinion because there wasn't much I wasn't clear on. Life, as difficult as it could be, was a cakewalk.

I reflect on that now, at the age of 50, and I wonder at how little I am like my 28-year-old self. While I still have my shit together—thank you very much—I am shocked—SHOCKED—to admit that I am much more anxious and unsure now, than I was then.

"Anxious." "Unsure." I want to deny those words; they embarrass me. I am a confident, take-charge woman, dammit!

It still remains that what I feel, in comparison to "28-year-old Lori," is that Life is fragile.

Since I was was 28? I married again, and to my utter surprise, divorced again. I lost my father. I cared for my mother, with Alzheimer's, while my sister lost her battle to ovarian cancer. Shortly after, our Grandmother passed away. In the midst of it all, my son deployed to Iraq, twice. 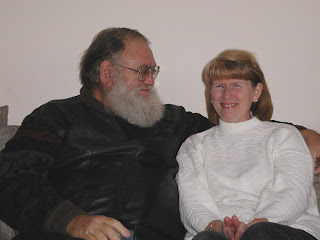 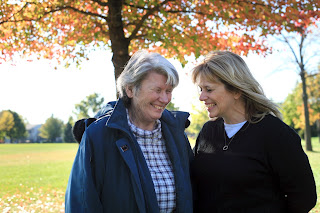 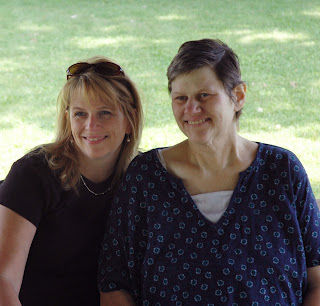 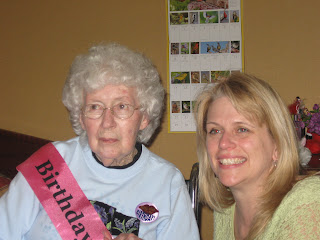 'Scuze me very much, but these events unnerved me just a tad.

Still, nervous as I may be, sometimes, at 50, I am also often so thankful that I am buckled.

My 40s found me dating a childhood friend, that at one point I gave the option to cut-and-run: I wasn't going to soon bring a lot of rainbows and teddy bears to the table. I'm still amazed that Clint's answer was "I know what Lori Stewart has going on." 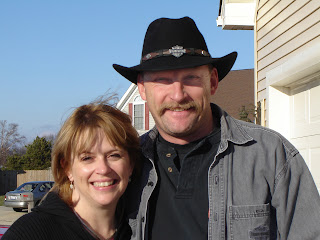 I am appreciative. I don't take an evening laughing with friends for granted; I rejoice in it. 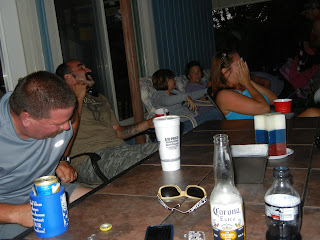 You can only imagine what hearing my son's laughter does to me. After fearing for his life for a combined 28 months? I hear it. Whether he's on the phone, or in my kitchen, or around a picnic table, I hear it, because it could have turned out so differently, and it did, for so many other mothers. 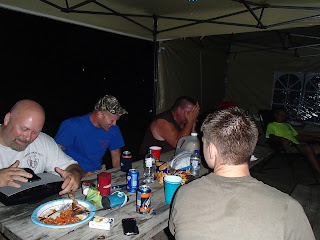 I have a great job. 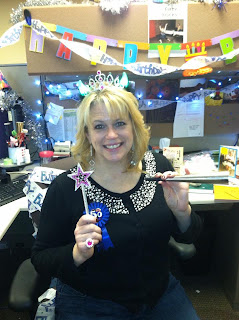 After losing one I worked in for 24 years, I have a great job. That I love what I do would be enough. But throw in health insurance after borrowing money to pay for my own, while I schlepped through a few temp jobs to stay afloat? Backflips, baby! When at 28, I would have haughtily thought "of course I have a job and health insurance! I wouldn't accept anything less!" Hmph!

Clean mammograms and clear pap smears are worthy of fireworks. I recently had a girl's night in which one of my BFFs would or would-not be in attendance based on biopsy results. She was there, and we got so drinky on Duck Farts* that we had to review the photos the next day to see if we had any fun or not. It certainly looks like we did. 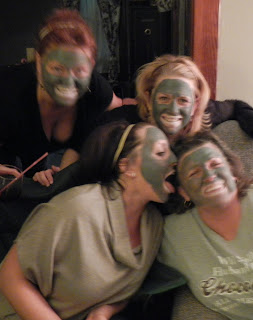 While I wouldn't have casted my vote for every event that's brought me here, I can recognize how I've grown. I love deeper, I laugh harder, I rejoice more readily, I hang on tighter, and I take less for granted than I did, at 28.

And this post, once again, has gone completely off track. It was going to be whimsical, and have a photo of a child's handwriting. 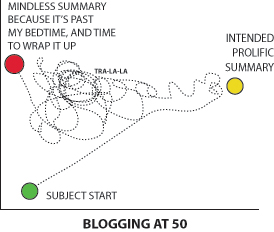 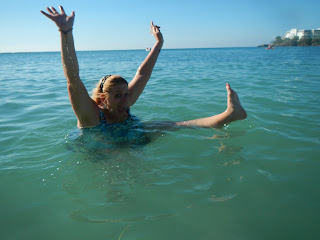