Clint and I had a rare 30 minutes the other night, in which we wound down the evening by 9:00, actually meandered to the living room together, and *gasp!*...sat down. I kid you not, we plopped down, 4 feet (2 of his, 2 of mine) on one footstool, and we watched a television show together.

Pawn Stars, we were watching, have you seen this show? Kind of a good 'ol boys version of Antique Road Show. Vegas, baby, bring your loot in and sell it!

I always want everyone's loot to be worth a ga-ba-zillion dollars. I'm embarrassed for the guys that smart off: "I'm hoping to get $15,000," and then Rick says "$100 is my best offer." It's like having the doctor send you home with nothing but instructions to drink more liquids. Either way you're a drama queen: You're not that sick and you're not that rich. Sleep it off.

I digress; I have a much deeper point.

In this particular episode, a customer brought in a rusty old can of canned pearls that said "Can-Can" on them. There was an insinuation on the side of the can of the (pearl-based) treasures within. Here's Rick and Chumlee with the can o' pearls: 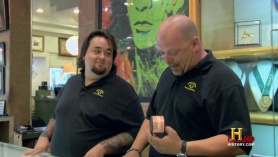 Stolen from episodewiki.. Hoping if they find me they will 1) exchange permission for exposure—after all, I have hundreds of   dozens of  four faithful readers; or 2) send me a ticket to bring my own secret valuables to the show. If all else fails, I will 3) remove this photo upon receiving cease and desist order.

Not having come across a can of Can-Can canned pearls before, the proprietor, Rick, couldn't risk offering too much on this guy's mystery treasure. Were they real or were they Memorex?

Still, he offered the man $10 to just let him open the can.

The Can-Can Man said that he had waited and wondered for TEN YEARS about what was in the can.

He took the money!!

He took the TEN BUCKS, after waiting TEN YEARS, and he waited anxiously for Rick to open the can.

TEN YEARS?!! CONVICTION, man! Either keep the can and drive everyone you know crazy with it, or open it yourself! Do NOT PAY SOMEONE ELSE TEN LOUSY DOLLARS (oh, am I shouting?) to open that can that you've been staring at for 10 years.

Crazed as I was, I leaned over and rubbed Clint's foot, and said "We are on the same page: we would let hell freeze over before we let someone else open our can for $10, yes, darling?" [Cuz that's how we talk, with the "yes, darlings"]

Heh. I'm a purger, he's a hoarder. Without discussing it, I know, we would each have done different things with our can.

And you? Open, save, or toss it to the Pawn Stars?

Our differences amaze me.
Posted by Lori Stewart Weidert at 11:20 PM 18 comments:

Once again, the absence of posts here isn't due to lack of fodder, but from excess. I have fodder coming out of my ears, people! For the sake of getting something up here, I'll toss some of it at you now.


___________________ Fodder #1 ___________________
I finally got my flower beds & pots planted. Last year the very second they were established and gorgeous, the deer tromped through for flower salad, leaving me with a sorry stem garden. This year, I intend to be diligent with deer repellant and chili powder. From the Indian grocer. Not that midwestern chili powder from Walmart, jack. This says "extra hot" on the bag, and they aren't a' kiddin.

Addendum: I wrote this post last night, and woke up to this, this morning:

Fat lot I know about chili pepper, I guess. Actually, we believe this is the work of a rascally raccoon. Back to FS Farmtown, to find an alternative critter repellant. 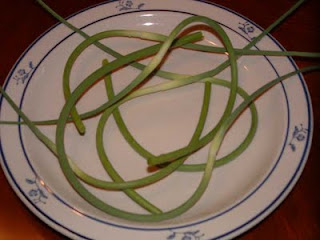 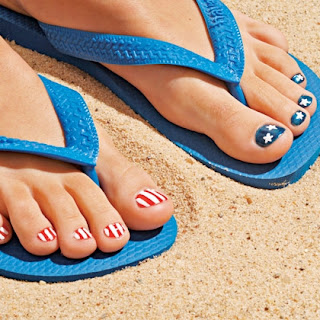 These are representative patriotic toes that I found in an image search. It says "let your children have fun with pedicures!" See? I told you I'm 12. 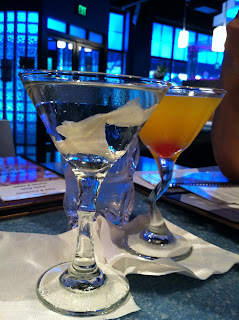 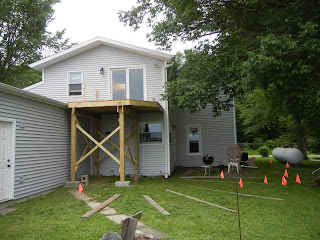 It's kind of amazing how when your kid is leaving in 1 month you're shaken and weepy, but a 3 month postponement leaves you in comfortable sweet denial. Enjoy this stateside time while we can. 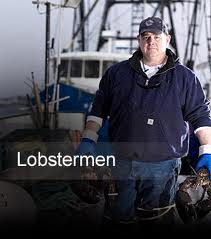 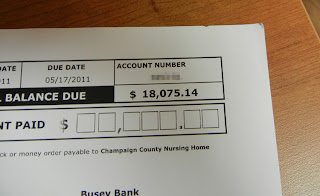 They're skittish and I haven't been able to capture even a halfway decent photo, myself. Steve Creek, of Steve Creek Outdoors (stevecreek.com) has kindly given me permission to use his photo of a male indigo bunting. I think his photo most captures why we become hypnotized when these beauties stop by. 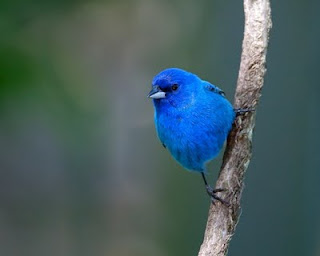 ___________________ Fodder #10 ___________________
Toys for Troops is still going strong. While finding names and addresses has always been the most work, I'm amazed to find them coming at me like wildfire right now. I have more summer soldiers than I've ever had, and I want them to get boxes. I'm getting ready to recruit offices, groups, and clubs to sponsor a package to each, and THEN I'm going to hit you up for money. A bona fide fundraiser is in order, the first since 2007. Who wants spaghetti?

My fodder really doeth runneth over.
Posted by Lori Stewart Weidert at 6:35 AM 8 comments: