Mama's Secret Recipes—Yours for the Taking

Wandering around the grocery store for a dinner option the other night, I contemplated my pantry, versus my mother's, when we were growing up.

My mother was an enigma in the kitchen: kind of a terrible cook, yet an adventurous one.

Of course she could make a nice salad and bake a chicken or throw a steak into a cast iron skillet. Anything fancier  came from a kit. Chef Boyardee boxed spaghetti dinners—a can of tomato paste and a packet of spice—add water to make sauce, and Italian! Muy Ooo la la!!

On the other hand, she was using cilantro in this berg for years before anyone had ever heard of it. She dragged us into the only Asian store in town, and bought cilantro, and fresh mushrooms—also newfangled—when midwestern fungus-eating hoity-toitys only bought canned. She fixed exotic dishes with tongue. She invented a weird sloppy joe recipe consisting of onion soup and flour.

I ended up walking out of the store thinking we were probably better fed than we ever knew, and we never went hungry, and probably my sister and I were kind of assholes for giving her dishes names like "Garbage Soup."

Honestly, I thunk myself into a bit of shame and chagrin for being such a brat.

Tonight, however, I was flipping through her recipe box and found this: 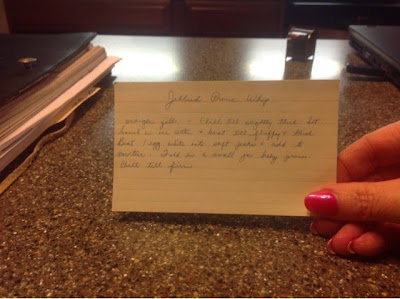 I think I just threw up in my mouth a little bit.

The moral of the story: I wish that my sister was here so we could slap our knees and laugh "we weren't assholes! We were right!"
Posted by Lori Stewart Weidert at 9:30 PM 3 comments: