Thirteen or so years ago, when I was [ahem] in-between husbands, one of my best friends, The Other Lori, and I set off for a vacation with my then-7-year-old son. (I'm sure that the mental damage for a little kid spending a solid week with two crazy women, friends since the age of 10, is still to be uncovered.

On our 6-hour drive to Grand Haven, Michigan, Lori and I decided to teach a few songs from our era to little Brian. History. Culture. Music. Art. We had his best interest in mind, when we began with "Bad, Bad Leroy Brown."

Unfortunately, Lori and simply could NOT sync the words "Bad, bad" no matter how many times we started all over. Our song went

Leroy looked like a jigsaw puzzle with a couple of pieces gone...

The song has never been the same for me. I purposefully sing the "bad's" in the wrong places now, because it is forever in my mind, askance. And I like it better that way. 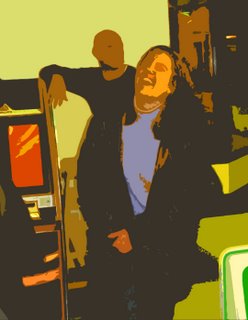 Out on the town Friday night, I ended up eating breakfast with friends at Merry Ann's Diner, around 11 p.m. We were 5, and there were only 2 other diners in the place.

On the way out, while each paid his tab, I toyed with the jukebox, and Marcy joined me. A few quarters borrowed, and apparently we were staying for one song: 4 Non Blondes' What's Up.

The jukebox, silent since we arrived, began to play, and Marcy sang along:
25 year of my life and still
And I'm trying to get up that great big hill of hope
and Charles joined in:
For a destination...
I, not knowing all of the words to any one song, was immediately charmed. Peter and Mike hummed and sang along, and I piped up during the chorus:
And I say hey...
And I say hey what's goin on
And I say hey...
I say hey what's goin' on
And I try, oh my God do I try
I try all the time
In this institution
I watched as the waiter, waitress, and cook, with little to do, approached the front, crossed their arms, and leaned back on the counter, smiling and listening.

And another employee, working in the back, crept out, giggling, and approached a dial on the wall, cranking up the volume a bit for the next chorus.

My friends' voices were being raised, the staff was smiling, and to boot, I turned to find the other two diners with their arms over their heads, doing that "raise the roof" move.

It was surreal. Everyone in the place was tapping their feet! I half-expected little Halie Kate Eisenberg to start tap dancing across the counter to the latest Pepsi jingle.

And then the song ended.

And for the rest of my life, I will hear that song as "Friday in Merry Ann's."

What are YOUR songs and YOUR scenarios? Please share. Really, I love all you guys'es stories!

And here's a song in your head: