9 days before Christmas, and I have all I could ever want all I want under my tree: 1 or more U.S. Soldiers. 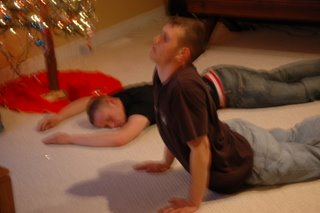 They were numb, and waiting for dinner that I promised I could deliver a short time ago, when they called to inform me: "We're 26 miles away." SuperMom-Mode kicked in then, and I recited a potential menu that I could whip up by the time they got arrived. They voted on spaghetti, and baby, italian sausage, onions, and garlic were saute-ing next to a pot of boiling water within 2 minutes of that phone call. I am one efficient Mamacita in the kitchen. 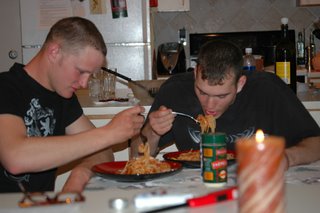 That's Brian, and his friend Dodds. Dodds refers to my son as "J-man." Interesting to note.

Dodds is in this town for 2 more hours; his ride arrives at midnight, to take him to HIS mama, in Chicago. He is 21, in the army for 1 year, 1 month. He and "J-Man" have the same MOS. He is an only child. Everything I do, from interrogating him, to snapping 1 million pictures while he is here, reminds him of his mother...at least, he assures me, that his Mom is in the same mindset as I am.

He asked me what I knew about military lingo. I confess, I know little, but I know what MOS means...though I don't know exactly what it stands for. I guessed..."Modus Operandi Something-something..."

Dodds accused me: "you are pulling that out of your ass."

My response, to my son, was "Did you hear what he said to your mother? He's talking about my ass!"

Dodds practically waved his lilly white boxers in surrender on that note, and sat down to his dinner.

He was a charming guest in my home, if only long enough to share spaghetti and a diet coke before making his exit. "Thank you for feeding me" he said, and I proffered, "thank you for letting me feed you."

And I meant it, with every fiber of my being.

And it's past midnight now, and he's 1/2 way between my home and his Mama's, where I'm sure she's waiting up for him.

And I'll tell you now, what she and I have both known since September.

Our boys are heading for Iraq.

Their deployment orders are undated, but it's looking like March. They are going to CA for desert training in mid-January.

It's hang-on-tight time, folks. I'm going to rejoice in this Christmas with my son, like I have no other.

I will call on you.
Posted by Lori Stewart Weidert at 12:37 AM