We have a few bad ideas: clothing that would deter muggers, and a restaurant in which the customer will shut the hell up and eat whatever slop we're fixing up that day.

But we hit on something brilliant last week: Mop shoes! Mop heads that you can just slip on your feet, then shuffle around and mop the floor! Admittedly, we hadn't figured out the wringing-out process yet, but we figured we'd counter-balance that obvious flaw with a callus-softener/moisturizer. Think about it: Exfoliate while you mop! God, we were just giddy with our ingenuity!

Our excitement was short lived, though. Look: 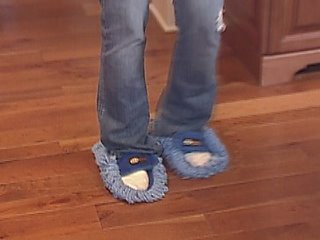 A simple google search revealed that someone else had already invented our invention.

Crap. Back to the drawing board. If you want a pair of these mop shoes that someone stole from us before we thought of them, go google "mop shoes" your own self. We're not just going to hand our money over to those sneaks!

Ok, fine. If you really want a pair, go here. I wouldn't want to step on anyone's mop-soggy toes.

But note that they don't seem to have the wringing out dilemma solved either. And I don't see anything that looks like a moisturizing agent. And why on earth is that guy wearing socks with his mop shoes?

What a stupid idea.
Posted by Lori Stewart Weidert at 11:40 PM