I've been trying to decide whether I'm going to use this blog as an avenue for venting about my consumer woes, and have decided, HELL yeah! It SAYS it's about my encounters, doesn't it?

Here is the summarized response from the company that installed my new windows: I purchased cheap windows and would have to expect water coming in to my house. I can't possibly expect a dry, sealed off window.


Ok, it's been a LOT more drawn out than that, and I've been yelled at and belittled by some chick named Becky. Trimming and sealing the windows, I was told, was not in my contract.

Now THAT is service, don't you think? Midstate Siding and Windows has been done proud by this employee!

As you can imagine, the conversation went downhill from there. She offered to have more people call me, probably to explain to me how it is I am wrong to have expected my windows to be sealed off, instead of merely suspended in a hole in the wall. I said, sure, bring it on.

In the meantime, I'm tired of her avoidance and condescension, and I won't hold my breath waiting for some salesman's supervisor to get in touch. I'm sending out a registered letter tomorrow, with photos, demanding repairs and an apology. Better Business Bureau and Attorney General will hear from me, and, if this isn't fixed, so will small claims court.

ON THE BRIGHT SIDE, THOUGH....

I accidentally paid for a lofty car repair last week that should have been covered my extended warranty. Once we figured it all out, the HONDA people were downright merry at the prospect of setting this to rights, and getting my money back to me as soon as possible. YAY for Honda!!

Last January, I purchased a carpet remnant from Carpetmasters in Champaign, and had it cut down and bound into an area rug and 2 runners, for an odd-sized space. Unfortunately, the main rug curled up at all 4 corners, growing increasingly worse with summer's humidity. My initial phone call to the company to fix this was met with nothing but an apology. After my mother nearly killed herself tripping over a curling corner, I knew I had to dispose of the rug.

I wrote the company telling them how disappointed I was with the product, and mailed it on a Friday evening 4:00.

NEXT MORNING, 9:00, Cookie, the manager called me, and made it right, on the spot. They couldn't steam the rug down, so I was invited into to pick out new carpets, and 3 new rugs were made for me, at their expense.

I have yet to send her a letter of thanks, but I am impressed and grateful, that she'd stand by her product 10 months after selling it to me, and I will DEFINITELY be talking to Cookie again when this sunroom issue is rectified.

So, there's good in the world. Look at my cute, flat rug: 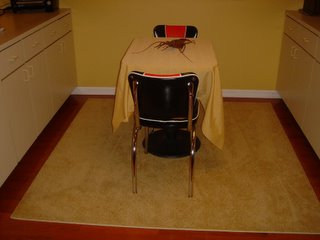