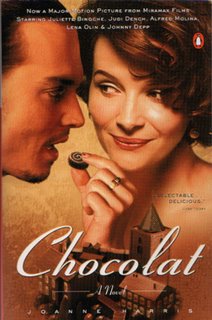 From the movie Chocolat, which was one of my favorite books long before it was a movie:

I've never been a chocolate freak, like a lot of people are. I actually crave salt and heat over sugar any day. While most woman are turning to Godiva during times hormonal, I am searching for sushi, with a side of high-sodium soy sauce, and enough wasabi to knock me off my ass.

I don't dislike chocolate—I'm in heaven with a $2 bite of dark chocolate from a good chocolatier, but that's about all I can handle with out reeling from sugar-nausea.

Every time I watch the movie or thumb through my copy of Chocolat, I've been intrigued with the idea of chocolate and chili pepper. Sounds, darling, like it's right up my alley. Why have I not searched it out?!

As luck would have it, a friend begifted me with this bar of chocolate, after a trip to San Diego last week. 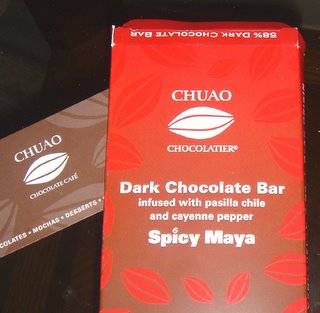 Uh-my-gawd, chocolate and chili pepper ROCKS! Where in the hell have I been?!! Look, baby, I doled out a square of this my son and his friend, who happened to be around when I opened the bar, but that is IT!!! The only reason this candy bar lasted 4 days is because I meant to ration it and make the heaven last. I had to FORCE myself to stop eating it!

I did a bit of research. Chuao Spicy Maya Chocolate Bar is not inexpensive. One candy bar runs about $13, but Va-Va-Voom, is it ever worth it!!!

I don't know if I'm the last goober on earth that hasn't experienced this stuff—for all I know it's as common as Hershey's, and I've merely remained oblivious in the chocolate loop in search of nori and wasabi. I am pleased as punch however, to finally have tasted cayenne pepper chocolate, to have moved a little closer into one of my favorite books, and to understand the surprise of Armande Voizin, when she tastes her chili chocolate.

Joyfully, the movie will never be the same. Neither will I.
Posted by Lori Stewart Weidert at 11:56 PM