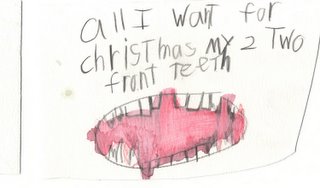 I mentioned, way back, that I join 2-to-4 kids once a week—when I'm not so busy that I keep guiltily begging off—to draw. Some weeks the lesson is structured, on perspective and shadow, for instance, but other weeks, it's "fun night."

Wednesday night, we made Christmas cards. Though I didn't use the cliche, I stressed to the kids to "think outside the box..." to come up with puns, use non-holiday items for clever ideas. A frog was drawn, with the words "Hoppy Holidays" scrawled across. A cartoon of a Santa stumbling down the chimney, "Happy Fall-i-days", and a lava lamp, "Feliz Lava-Dad".

Moms & Pops prefer I don't use their real names, but J***, Age 7, fixed up this card, inadvertently making it too large for the envelope. I told him he'd have to trim it down. He got right to it with the scissors, stuffed it into an envelope, and addressed it to me.

He sealed it, and handed it to me, insisting, "Open it!"

Fine. I opened it, pulled it out, and admired the..uh...drawing that he insists was not blood, but merely "mouth-colored."

"OPEN it!!!" He insisted, still. Ok, something written inside?

I folded over the front page...

...and the thing fell apart in my hand, into 2 pieces.

I gave J*** a dry look, and he collapsed into incontrollable laughter, tears rolling down his cheeks.

He'd inadvertently cut off the fold-side of the card when he trimmed it to fit the envelope, cutting the card into 2. Instead of trashing it, he decided to play a *bit* of a practical joke...

Sigh....There was a day when a 7-year-old couldn't pull one over on me.
Posted by Lori Stewart Weidert at 10:25 PM