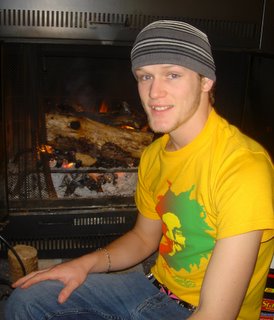 A magical day here. I woke relatively early, and began cooking, to take stuff to Mom's. Later in the morning, Brian and I shared bacon and OJ as we opened our gifts to each other. Brian had saved some money, and showered me with gifts, to my shock. My gift to him was a digital camera*; with high hopes that he'll send me pix of his "new life" later in the year.

Off to Mother's, then.

Christmas, in our family, is slightly untraditional, but always wonderful. We do not throw a formal ham and/or turkey Christmas dinner. Mom and Sis collaborate on a big pot of chili, and I'm in charge of a clam chowder that is guaranteed to knock your socks off and add two pounds to your already expanding holiday girth. We gather together around the beautiful fireplace my father built 30 years ago, cook hot dogs, brats, and polish sausages, and later, marshmallows.

Our kids know nothing else for Christmas day, and I am proud of the warm tradition, the chaos, the pushing and shoving and laughing 'round the flames each year, attempts to knock each others' foodies off their sticks.

Today was no different, a ridiculously wonderful day. Food followed by gifts a bandit would be jealous of. My brother-in-law's mother joined us, and we had a wonderful cozy day in my Mother's small house.

Home then, to make a few long-distance calls to friends and family.

All of this followed up by a quick summary of the state of the house: Disaster!

Sigh. Nothing to do then, but ignore it, open a bottle of champagne and watch "Elf."