Although we've been busy, I've still been on Cloud #9 for the last couple weeks, since Brian's been home. I'm pleasantly surprised that Brian & Company haven't been eating out for dinner, but prefer to hang out at my house. 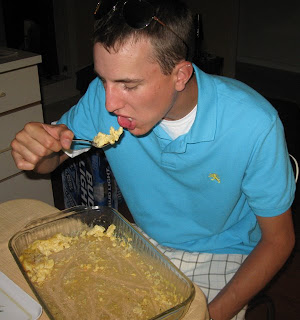 Johnny polishes off the Mac & Cheese
(Paula Deen's recipe, modified and baked instead of slow-cooked)
And of course, 10,000-Calorie Mashed Potatoes. I fixed 5 entire pounds of them for the boys Monday night. I asked Brian to pose with the bowl of potatoes that he's waited 9 months for, and just as I took the pic, 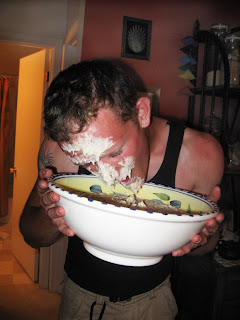 It's really good to have him home.
10,000 Calorie Mashed Potatoes
5 lbs of potatoes: don't, for the love of God, peel them! Just chop them coarsely and boil them in water with a little salt

Then mash them with
I began to feel guilty with all of that, and asked Brian if he thought I should add cheese too. He looked at me like I was crazy. "YES!"
Add all that until they're as whippy as you'd like.

Loosen the top button on your pants and eat.

Unrelated Note: I always knew how to spell "potatoes" until Dan Quayle screwed it up. It was such a huge issue that now I have "Potatoes Anxiety" every time I type "potatoes," and honest to God, go and look it up on dictionary.com.
Posted by Lori Stewart Weidert at 2:15 PM