Dorothy = My Mother, for this blog alone. The name has been changed to protect innocent little old ladies.

I was doing some work around the house and yard at my mother's house tonight, when the phone rang. She was off in the house somewhere, so I answered. A male voice on the other end asked "Dorothy?"

"Can you put Dorothy on the phone?"

Look. My mom gets phone calls from about 4 people, and the rest are directed to me. She just gives them my phone number, as I've instructed. So I asked who was calling, please. He said "This is Josh," in a clear tone that indicated that it was absolutely none of my business who was calling.

"JOSH SCHIZZLE.* IT'S JOSH SCHIZZLE, CAN YOU JUST PUT DOROTHY ON THE PHONE?!" he yelled at me.

He screamed at me then: "LOOK! FORGET IT! I OBVIOUSLY CALLED AT THE WRONG TIME, JUST FORGET IT!!!"

I think you called at the right time, Josh Schizzle. Unfortunately, this is the phone I just bought my Mom, to make it easier for her to call us, in case of emergency: 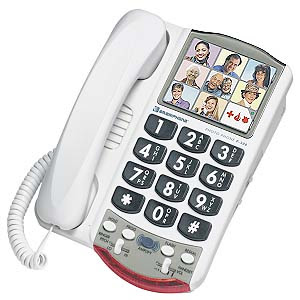 Great in theory, but aurghhhh, no caller I.D.

So. Josh Schizzle. You think he's someone preying on little old ladies, or just an irritable telemarketer? He spoke with such a tone of familiarity that I questioned my Mom: "have you been talking to anyone on the phone lately?" She swears no.

It was unsettling, this nasty call that I intercepted. What would Josh Schizzle have said to my Mother?! I went straight to Radio Shack and bought a caller ID box to attach to the phone. I gave Mom explicit instructions not to answer the phone to anyone she didn't recognize, and to hang up if she doesn't know who she's talking to. And I'll be checking that caller ID every day, and I'll be keeping an eye out for that stupid Josh Schizzle. Sheisel. Shezzel. However he might spell it, I'll be watching him.

Anyone else had to deal with odd phone calls like this? I mean, if I catch him, what in the heck do I DO with him?! Is "please put us your do not call list" enough?

Research is in order.

*Josh Schizzle's name has not been changed. I'm only protecting the innocent here; the rest can sit on it, Potsy.
Posted by Lori Stewart Weidert at 10:14 PM