Off the Beaten Path

This is Downtown Arthur, IL, taken from the north end. It's about 40 miles from my place, and I spent Sunday afternoon walking around and taking photos of this little town and another, Arcola, IL. They're 9 miles apart from one another, and known foremost for being Amish communities, also with a large Mennonite population.

I'm often more surprised and contemplative after visiting these towns, than I am by anything I see in a big city. It's true that Venice Beach offers up a guy with naught but two tufts of hair on his head, dyed red, and molded into horns, and with a bright red tail tattooed on his back.

But Arthur finds me standing in line at mini mart, behind a young man, with sleeves of ink. He wears his ballcap backwards, and bounces to tunes on his iPod. In front of him, a young Mennonite girl, in a pastel pink dress that falls past her knees, and her hair tucked into a white cap. A long white ribbon from her cap is tossed over her shoulders. They are about the same age. They are both buying candy, a beverage.

This, I think, is culture clash like none I witnessed in Los Angeles.

Arcola is often referred to by those in our Mexican community as "Little Mexico." I found a brief article in their local paper about the Hispanic community, that began building in the late '60s when folks started moving here from Cadereyta, Mexico to work in the Broom Industry. (Broomcorn, for those of you that don't live around here. Broomcorn. Broomcorn Festivals. Broomcorn Brooms. Read Dave Barry's take.). Cadareyta, the article says, is often referred to as "a sister city" to Arcola.

As I walked around Arcola, several cars passed me, rattling with the beat of loud Latin music, the drivers all nodding a hello. These guys asked me take their picture. Ok. Click. 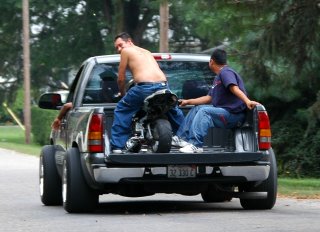 On the advice of friends, I stopped into a little hole-in-the-wall, Mom & Pop place called Taco Tako. $6 gets you cinco (that's 5, goober) bistek tacos (handmade tortillas!) with cilantro, cheese, & lettuce, and a side of grilled onions, hot sauce, and fresh lime. 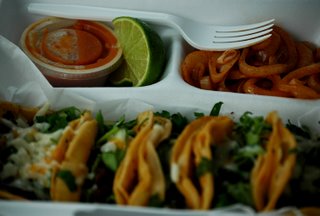 There are less than 5,000 people in these two towns, combined (2,662 Arcola, 2,203 Arthur) and yet, they are amazingly rich in cultural and religious diversity. 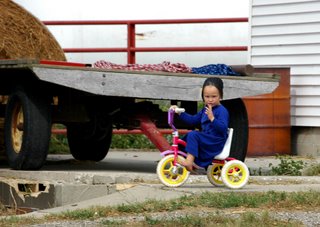 There is, of course, quite a bit of tourism in these places, people come from miles around for Amish crafts, quilts, and cheese. Tour buses hit the hot spots: Rockome Gardens, and the Cheese Factory. But they are both "don't-blink, or-you'll-miss it!-" sized towns.

My advice, as it is anywhere you go, is to get off the beaten path and open your eyes.

Because there's so much to miss, if you blink. 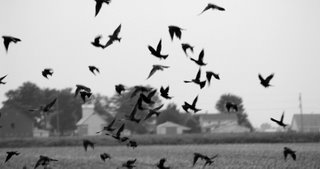