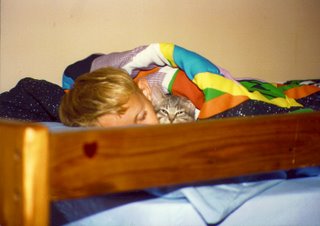 There's my two little kittens, circa 1991. It was April of that year, when Brian was 5, and I was ... 28 (!) that we heard through the grapevine that a nearby farmer had some kittens to give away. I'd bought a house in January, and we had our act together except for one thing: We needed a pet. We should, we decided, probably check out those kittens.

This particular one chose us in a matter of minutes, and we merrily hit the road, trying to pick out a name for her. Brian decided, suddenly, that her name would be Sylvester! That was it. Sylvester the Cat!

Sylvia, she became, after a little coercing on my part.

She was a precious thing, and meowless. She'd utter a weird voicy growl, now and again, but meowing, rarely. She and Brian were fast and furious from the get-go. He'd drape her over his head, and she'd happily ride along like his little cat-hat, never offering up any kitty arguments, and often coming back for another ride. They pounced and screamed, and ran through the house for years, he with a feather on a stick, and she determined to make mincemeat of it.

We taught her a few cool cat tricks. After feeding her, we'd walk away, and tell her, "Say thank you, Sylvia." She'd leave her dish every time to give you a quick rub across your ankles before heading back to the grub.

And there was a game called "I'm a cheetah," in which we'd wrestle around with her (saying, of course, "You're a cheetah, Sylvia!") until she was tempted to bite. Then we'd call out "no bite!" and she'd stop where she was, mouth still open, a tooth poised on your arm. She test you a little bit, but with another "noooooo" she'd leave the game altogether, as if to say "screw it. If I can't bite, I'm not playing."

Brian and I browsed through a cat book once, in which cat's emotions were potrayed. One of the portraits amused us, with a caption that said "this means worry." He'd then tease the hell out of the cat, holding large objects (usually pillows) over her head, and when her expression was just right, he'd say "Look, Mom. This means worry."

I'm pretty sure he held one of our floor pillows over her head when he was home on leave in July.

15.5 years we've been coming home and greeting our beloved Sylvia.

Alas, she fell very ill last week. When I took her in to our vet, it was only a matter of minutes before the doctor informed me that she had a lymphoma that was fatal. I wasn't altogether surprised to hear her words, I knew our kitty had been slowing down for a few years, and I knew she wasn't feeling so hot.

I'm usually pretty good at keeping my emotions in check. But I began weeping at the word "fatal," and I cried unapologetically through the rest of the conversation, in which I determined that she would only continue to suffer, and worsen, if we kept her alive. It was a no-brainer, the decision to put her to sleep.

The house is lonelier by 1 now. I still unconsciously look for her, before jumping into bed, so I don't land on top of her. I gave Brian the bad news on Saturday morning, after he'd gotten in from the field, for 10 days. "Ohhh, Poooooooooooor Kittyyyyyyyyyyyyy" he said, in a baby voice that was meant for me, I know. He is a tougher soldier than I.

And you know, I have the nicest friends in the whole world. I put out a mini-APB on Thursday morning, and friends called within a half-hour, to see if I was OK. And e-mailed through the day. And left me messages to call them, also. And though I had a few things to take care of at work, the bossman told me to go home whenever I wanted to. And when I felt like burrowing in at home on Friday night, I still got phone calls from my coffeeshop buds, inviting me down, and telling me whom all had asked for me, or said hello. And my mother called, and some others, I learned today, toasted Sylvia and drank to her.

So. Thanks, you guys, for looking out for me.

And have one for Sylvia, next time you're out. 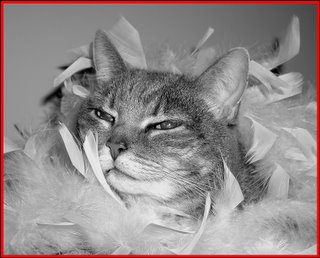